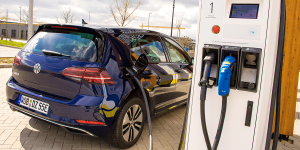 At the “car summit” held at the Chancellery in Berlin, the German federal government and industry representatives have agreed on measures to boost electric cars sales. Purchase premiums and the number of charging stations will increase, while some questions remain unanswered.

The key points have been leaked from the car summit meeting, which included Chancellor Angela Merkel and key figures in Germany’s mammoth car industry. A purchase premium for electric cars will be increased and extended, and the “environmental bonus” will continue till the end of 2025 instead of coming to an end next year as originally planned.

So far, electric cars have only been subsidised up to a netlist price of 60,000 euros. This cap will be increased to 65,000 euros. Government spokesman Seibert said: “The federal government will extend the environmental bonus for the purchase of electric vehicles still in November and increase it again significantly – by 50 per cent for vehicles up to 40,000 euros net list price and beyond that up to a limit of 65,000 euros net list price by 25 per cent.”

The Federal Government is also examining “simple and unbureaucratic ways”, such as offering premiums for young used cars, which could receive an environmental bonus as a second-hand car. According to the federal government, the measures will make it possible to subsidise a further 650,000 to 700,000 electric vehicles.

Government spokesperson, Steffen Seibert, said the changes to the environmental bonus would be decided in November. But it remains to be seen when the new rates will be paid out – immediately, from 1 January 2020 or 2021? On Monday, on the occasion of the start of production of the VW ID.3 in Zwickau, the Federal Government announced: “The Federal Government has therefore extended the environmental bonus until the end of 2020 and is planning an increase for smaller vehicles such as the new Volkswagen ID.3 from 2021”.

Also decided at the car summit was to accelerate the building up of charging infrastructure. In the next two years, 50,000 publicly accessible charging points are to be built. The automobile industry will contribute 15,000 public charging points by 2022. “We have now committed ourselves to build at least another 15,000 charging points on the premises of companies in the German automotive industry and associated trades by the end of 2022. The aim is to have 100,000 charging points in place by 2030. These are enormous investments that our member companies are making,” emphasised Bernhard Mattes president of the VDA, Germany’s automobile association.

“This is good, this is a step forward,” said Lower Saxony’s Minister Stephan Weil, who sits on the VW Supervisory Board. But he did not hide the fact that the targets could have been set higher. The automotive industry is facing “very decisive years”, said Weil.

Mattes spoke of a “good package” when describing the deal put together at the summit. This was a further step towards the “mobility of the future”. Other international car manufacturers have welcomed the master plan and announced their support. “A comprehensive charging infrastructure is a basic prerequisite for more drivers to switch to electric mobility,” said VDIK (Association of International Motor Vehicle Manufacturers) President Reinhard Zirpel. “We, therefore, welcome the fact that the Federal Government is now setting up an overall strategy with a master plan for charging infrastructure. What is important now, is for the master plan is implemented quickly without delay.” Also, Zirpel called for rapid reform of the German residential laws to facilitate the establishment of private charging infrastructure.

The energy industry has also announced further efforts and will meet the responsible ministers in 2019. The federal government, for its part, intends to support the expansion of charging infrastructure with 3.5 billion euros in the coming years. This is provided for in the “Master Plan Charging Infrastructure” just drawn up by the Federal Government. The locations of the charging points will be coordinated with the federal government. In the first draft of the master plan, which Transport Minister Andreas Scheuer presented at the end of October, it was stated that a National Control Centre would be set up by the end of the year to coordinate the necessary measures for accelerating the development of the charging infrastructure.

On the sidelines of the ceremony to mark the beginning of ID.3 production, Chancellor Angela Merkel said that support for the development of the charging infrastructure was limited until 2025 in order to “build up pressure over time”. She also promised faster approvals for charging points. Such statements were not reiterated in the government’s press releases after the car summit. Here it simply says: “The legal framework conditions will be improved quickly”.

reuters.com, bundesregierung.de (both before the meeting), finanznachrichten.de (in German, after the car summit)