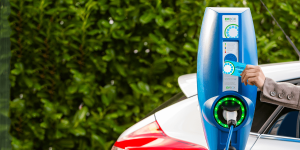 The news was announced at EVBox event Revolution Connected NYC, which gathered over 200 North-American participants in New York. CEO Vereenooghe took the opportunity to confirm the one charger, one tree initiative.

Says the EVBox boss: “Last year, we planted 15,000 trees. By achieving this great milestone of 100,000 charging points worldwide, we pledge to plant one tree for every new charging point.”

The initiative builds on recent research by Science Magazine, with figures showing that “two-thirds of all emissions that remain in the atmosphere today can be removed with a worldwide planting programme”. More specifically, the researchers found that there are 1.7bn hectares of treeless land, which offer a total of 1.2tn where tree saplings can naturally grow.

Accordingly, EVBox says it will collaborate with local reforestation organisations across all continents as part of the ‘OneChargerOneTree’ initiative. At the beginning of the year, EVBox already acted upon previous promises by planting one tree for every charging station that was sold in 2018. This added up to 15,000 trees mentioned above.

From 2015 to 2019 EVBox claims its total network grew by 400% (from 20,000 to 100,000 charging points). The company has committed to having at least one million EV charging stations, both regular and fast-charging worldwide by 2025. The pledge is part of the ZEV Challenge, an initiative set up by the C40 Cities and the Climate Group to accelerate the adoption of electric vehicles. Initiators include cities like London, New York and Paris as well as industry partners.

EVBox is also cooperating with a number of other charging networks through roaming agreements, such as ChargePoint in the US or most recently Gireve.

EVBox was taken over by the French energy group ENGIE in March 2017 and last year expanded its European network by 1,000 already installed fast-charging stations with the purchase of the manufacturer EVTronic from France.