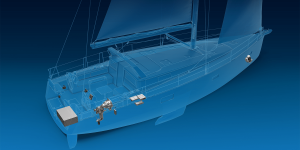 ZF has developed an electric drive system for sailing yachts. For this purpose, the German supplier is installing an electric motor with a maximum output of 125 kW, which is connected to ZF’s steerable Steerable Pod Propulsion System (SPP).

With the electric auxiliary drive instead of a diesel engine, the sailing yacht can travel emission- and noise-free when taking off and mooring – and thus also call at ports that remain closed to yachts with conventional drive due to environmental regulations.

“In developing the high-end induction motor, we were able to rely on synergy effects within the Group,” explains Massimiliano Cotterchio, Head of Sales Product Line Pleasure Craft. “We use the same platform and many of the same system components our company already uses successfully and widely in other applications,” says Cotterchio.

This electric sailing yacht concept is already being tested under real conditions. Since September 2019, an innovation ship has been cruising on Lake Garda – Italy’s largest lake – for this purpose. The prototype is equipped with a 60 kWh battery and reaches an average cruising speed of almost 7 knots (13 km/h) with a range of approximately 30 nautical miles (55.5 km). The structure of the test ship is similar to the planned series application.