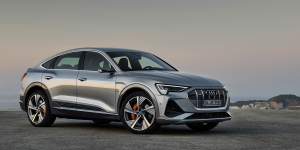 Audi is expanding its e-tron family with a second body shape. With the e-tron Sportback, the German VW subsidiary is introducing a fully electric SUV coupé that can even (theoretically) drive a little further than the well-known e-tron 55 Quattro.

The most striking feature of the new Sportback model is, of course, the rear. At the front, the e-tron Sportback resembles its SUV brother, but the roof falls off much earlier and ends in strongly inclined D-pillars. In addition, the lower edge of the third side window rises to the rear, which is also a feature of Audi’s Sportback models. At 1,616 millimetres, the e-tron Sportback is a total of 13 millimetres flatter than the more familiar e-tron. The vehicles’ length and width (4.901 and 1.935 metres) are exactly the same for both versions.

This also applies to the drives. The e-tron Sportback is also available with two drive options. The 55 Quattro delivers 265 kW (and up to 300 kW in boost mode), the 50 Quattro provides 230 kW. The major difference between the two drives, however, is the battery: in the e-tron Sportback 55 Quattro, this is 95 kWh gross (86.5 kWh net) and consists of 36 modules, each containing twelve pouch cells. In the e-tron Sportback 50 Quattro, Audi dispenses with nine of the modules; in its remaining 27 modules, the battery still stores 71 kWh (64.7 kWh net). According to Audi, however, prismatic cells are used in the smaller battery.

While the more powerful model can accelerate to 100 km/h in 5.7 seconds and reaches a maximum speed of 200 km/h, the e-tron Sportback 50 Quattro accelerates to 6.8 seconds and has a top speed of 190 km/h. The battery is equipped with prismatic cells and the performance data for quick charging is also different due to the different batteries: With the large battery, the e-tron Sportback can charge with a maximum of 150 kW, with the small battery with a maximum of 120 kW. In both cases, Audi indicates a charging time of just under half an hour to 80 per cent.

The same statements apply to AC charging as for the familiar e-tron quattro: the AC charging capacity is 11 kW, from summer 2020 the car can be ordered with an optional second onboard charger, increasing the charging capacity to 22 kW. The Plug&Charge function is also to be implemented in 2020.

There are again differences to Audi’s e-SUV in terms of range: with a provisional 446 WLTP kilometres (final approval still pending), the e-tron Sportback 55 quattro can drive 31 kilometres further in the standard than the familiar SUV. Audi attributes about ten kilometres of the increase in range compared to the e-tron to the aerodynamically more favourable body. Whether the weight also plays a role cannot be said with certainty, as no figures have yet been given on the Sportback. The e-tron 55 Quattro has an unladen weight of 2,565 kilograms.

As expected, the boot volume of the Sportback has been reduced; the standard volume has 615 litres of space instead of 660. With the rear seatbacks folded down, the maximum volume in the e-tron is 1,655 litres instead of 1,725 litres. The 60 litre frunk (for example for the charging cable) is the same in both models. Of course, there is also a little less space for the passengers in the rear seat: because the roofline slopes down sooner, the headroom in the rear is 20 millimetres less.

The rest of the interior corresponds to that of the Audi e-tron. As in all luxury models, Audi relies on its operating system with two touchscreens. The driver controls infotainment, telephony, navigation and special e-tron settings on the 12.1-inch diagonal upper touchscreen. The lower display, which measures 8.6 inches, is used to enter text and operate the comfort functions and air conditioning. As in the e-tron, the Audi virtual cockpit is part of the standard package.

The new model is also available on request in plasma blue metallic, exclusive colour for the e-tron Sportback. The revised LED matrix headlights are much more innovative than the 13th paint option. The light can be divided into even smaller pixels using a technology called DMD (Digital Micromirror Device). About one million micro-mirrors, each with an edge length of only a few hundredths of a millimetre, can be tilted up to 5,000 times per second using electrostatic fields. Depending on its position, the LED light either reaches the road via the lenses or is swallowed in an absorber to create fades.

In a car, familiar functions such as special lighting for city, bend or motorway lighting can be carried out more precisely. Above all, however, it offers innovative functions such as lane and orientation light. On highways, the lane light creates a carpet of light that brightly illuminates one’s own lane and adapts dynamically when changing lanes.