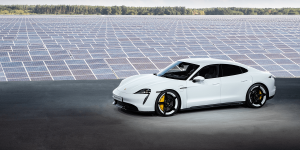 It appears that Porsche is also facing some kind of difficulties with their original delivery deadlines: Customers will be getting the Porsche Taycan later than originally planned – at least in Norway.

Taycan reservation holders in Norway have been informed by Porsche that despite all efforts to deliver the electric model from January, there will be delays of “eight to ten weeks” due to the “enormous complexity of production”. The mail was published in a Facebook group.

“The car was developed from scratch and manufactured in a brand new factory. All Porsche employees have been working hard to deliver Taycan as planned in January,” says the Porsche letter. “Due to the enormous complexity involved in producing Taycan, we unfortunately have to report somewhat late delivery dates.” The seller is to inform the customers of the new production period.

Porsche started series production of the Taycan in September. Pre-series production already started in 2018, but either Porsche has not been able to smooth out production problems, or the reason for the delay lies with a supplier. Porsche did not give any further details on their reasons in their mail.

Update 21.11.2019: When asked, a Porsche spokesman explained that a longer start-up curve was planned for the Taycan due to its complexity – new technologies, new plants, new employees and new supply chains. “Deliveries will start as planned in 2019,” the spokesman said. “As we ramp up production somewhat more slowly, there will be some shifts in the high demand.” As a result, some, but not all, customers may experience delays in delivery, about which the dealers (and then the customers) have been informed as a precautionary measure. There is no problem in production or with a supplier.