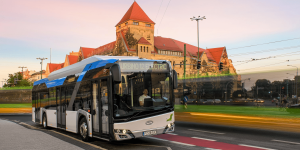 The Hungarian city of Paks has ordered ten battery-electric buses from Solaris. The contract provides for the delivery of six Solaris Urbino 12 electric buses and four 8.9-metre-long buses together with five charging stations.

The central Hungarian city of Paks has opted for six 12-metre buses and four 8.9-metre buses. The Urbino 12 electric can carry 70 passengers in the version ordered, 28 of them seated. The vehicles will also be equipped with a passenger information system, a video surveillance system, a fire alarm and extinguishing system and a closed driver’s cabin. USB ports are also installed in the passenger compartment so that passengers can recharge their mobile devices.

According to Solaris, the smaller battery buses ordered will have a similar standard of equipment. They can accommodate up to 40 people, including 24 in seats.