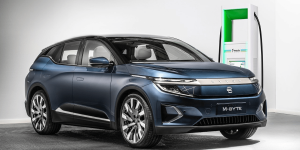 Byton will cooperate with Electrify America to provide owners of its electric cars in the USA with two years of free charging at the Volkswagen subsidiary’s public stations. Byton promises it will also be making “further important announcements” soon.

Jose Guerrero, Managing Director of Byton America, sees the deal as an example of Byton’s customer centricity. “Talking to our future customers, it’s clear that easy access to the public charging infrastructure paves the way for a seamless EV ownership experience,” Guerrero said.

There is currently no information about a similar offer for Byton customers in Europe, but this could soon change. “This Electrify America partnership aligns with our global strategy, in prelude to other major announcements to come,” said Andreas Schaaf, Chief Customer Officer of Byton.

Electrify America was founded in the USA by Volkswagen following the diesel scandal. The US-wide fast-charging network should accelerate the introduction of electric cars. Currently, stations are planned in 42 US states. “In addition to Electrify America’s growing network of public charging stations, the company’s unique network interoperability agreements with several other major networks will bring Byton drivers access to more than 36,000 DC Fast and Level 2 chargers, all from a single Electrify America account,” said Giovanni Palazzo, President and CEO of Electrify America.

Ekoenergetyka-Polska to install chargers in Warsaw