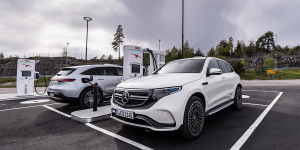 Mercedes-Benz has announced pricing information for the EQC in the United States. Arriving in U.S. dealerships in early 2020, the Mercedes-Benz EQC 400 4MATIC will start from $67,900. Sales will begin in early 2020.

The EQC will launch with an 80 kWh Li-ion battery coupled with two electric axle-motors. This makes for 760 Nm torque (561 pound-feet) and a 4.8 second sprint from 0-62 mph. The top speed was electronically limited at 112 mph. While the EPA has not released an official range rating yet, it is expected to “fall between 200 and 220 miles”. Charging the battery from a DC fast charger from 10% to 80% takes only 40 minutes, however using a wallbox charger you will find a waiting time of 10 hours for a completely full charge (10%-100%).