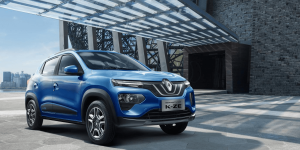 According to German media, the planned modified version of the Renault City K-ZE small electric car offered in China is now headed for Europe. Here, the electric vehicle is to run under the Dacia brand in 2021 with a new name.

German car magazine Automobilwoche revealed that the electric model would offer a WLTP range of 250 kilometres in Europe and cost around 15,000 euros, including battery. In Germany, for example, with the country’s recently increased environmental bonus, the Dacia would be available for less than 10,000 euros.

So far it has not been decided whether the European version of the City KZ-E offered in China at competitive prices should be sold as Renault or Dacia. In the past, the brand logo was exchanged for individual markets; for example, the Dacia Duster was sold in Russia as Renault Duster. The decision in favour of the Dacia Duster is not based on the value of the car and the brand image, but solely on the EU’s CO2 targets.

“The stricter CO2 limits that will come in 2020 are a challenge for us,” Group Sales Manager Olivier Murguet told Automobilwoche. The Dacia fleet, with its low-cost combustion engines, is currently emitting too much CO2, and investments in new and costly technologies are challenging to stem in the low-price segment. Dacia wants to reduce CO2 emissions with more efficient combustion engines and more gas-powered cars – and as a third option “in the long run, electrification,” Murguet said. The City KZ-E from the parent company Renault is the first step.

In October, Renault’s electric car boss Gilles Normand announced that there would be a version of the City KZ-E adapted for Europe – this involves changes in the safety equipment and the shift from the Chinese GB/T charging standard to the CCS plug widely used here. Sales manager Murguet said: “And I don’t think the name will stay that way in Europe”.

In China, the model is sold for 61,800 yuan, the equivalent of no more than 7,900 euros. It has a motor power of 33 kW, a torque of 125 Nm and a 26.8 kWh rechargeable battery that can be quickly charged above the Chinese GB/T standard for a range of 271 kilometres – but in the unrealistic NEDC cycle. The energy consumption is estimated at 10.8 kWh per 100 km, the top speed at 105 km/h. The battery can be recharged at high speed. The equipment also includes an infotainment system with an 8-inch touch screen.

automobilwoche.de (in German, with paywall)