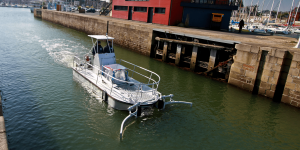 Torqeedo is supplying the electric drive for the Waste Cleaner 66 – allegedly the world’s most potent all-electric boat for cleaning inland waterways and harbours of pollution. A 25 kW Deep Blue engine and a 40 kWh battery power the vessel.

According to electric boat specialist Torqeedo, the battery capacity at a cleaning speed of two knots is sufficient for up to eight hours of operation. The six-meter long aluminium ship uses a patented technology to hold up to 700 kilograms of solid waste and 1,000 litres of liquid waste, including hydrocarbons. According to the manufacturer, the cleaning system automatically separates water and hydrocarbons to prevent emulsification.

The EFINOR subsidiary Sea Cleaner built the boat at its shipyard in the French coastal town of Paimpol. It will be officially presented from 7 to 15 December at the International Nautic Boat Show in Paris. According to Torqeedo, the boat was specially designed for use in inland waters, harbours and coastal waters. It can also be used in areas with jetties and narrow bends, where access is naturally difficult. The boat can pick up garbage both when stationary and while travelling forwards or backwards, and it is also designed for road transport to take it quickly to new locations.

“Our teams have worked closely with Torqeedo’s engineers to create a highly efficient climate-neutral platform that meets the needs of harbours and marinas to maintain clean water while reducing their environmental impact,” says Benjamin Lerondeau, head of EFINOR Sea Cleaner.

Torqeedo CEO Dr Christoph Ballin adds that the interest of other operators of waste disposal ships around the world is also high. The ship Waste Cleaner 66 has provided ideal conditions for electrification: “The Deep Blue electric motor provides the low-speed torque and manoeuvrability needed to capture debris from the water while emitting no noise or exhaust fumes.”