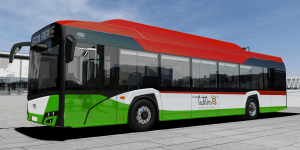 The Polish city of Lublin is investing in the further development of its fleet of zero-emission vehicles. Representatives of the Lublin Transport Authority and the Solaris Board have signed three contracts for the delivery of a total of 20 battery buses and 15 trolleybuses including charging infrastructure.

According to Solaris, the total value of the contract exceeds 86 million zloty or just over 20 million euros. The City of Lublin has ordered 15 Trollino 18 trolleybuses and 20 Urbino 12 electric solo buses.

The first batch of five trolleybuses will be delivered in November 2020, the remaining ten Trollino 18 will follow in April 2021. According to the agreement, the 20 battery-electric buses are to be handed over to the Lublin Transport Authority by September 2021.

“The contracts signed today mark another step towards establishing Lublin as a centre of electromobility,” says Krzysztof Żuk, mayor of the City of Lublin. “Thanks to investments in battery buses and trolleybuses, the share of electrically powered vehicles in the entire Lublin fleet is already 25 per cent.” The City expects to increase this to 50 per cent by 2021.

In addition to their overhead power supply, the Trollino 18 have a 58 kWh battery to enable them to travel short distances without using this catenary  – for example in the event of a power failure or diversion along the route. The vehicles each a 240 kW drive.

For the 160 kW Urbino 12 electric, Lublin has opted for relatively small battery versions with an energy content of 116 kWh. These electric public transport vehicles are designed for frequent and fast charging, according to Solaris. At some stops, the batteries are to be recharged for a few minutes via pantograph, while they can charge at a slower rate overnight when plugged in. Photovoltaic panels are also mounted on the roof of the electric buses.

Solaris has managed to benefit from the boom in electric buses in Europe as city councils across the globe begin electrifying their fleets. More than every third electric bus in the EU was built in Poland. The strength of the industry in Poland is not only based on the domestic manufacturer Solaris – but also on a constantly high demand from its own country, as Aleksandra Fedorska analyses. The bad air in many Polish cities has meant that domestic demand has been high for years. Now the country has made a positive from a negative – benefitting from the tackling of its bad air problem by reaping the rewards of being an early adopter as interest in the rest of Europe increases inexorably.