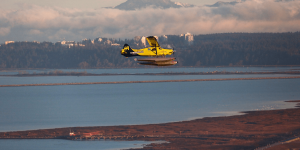 Since March of this year, the US company MagniX, specialising in electric aircraft propulsion, has been cooperating with North America’s largest seaplane carrier Harbour Air, based in Richmond, Canada. A six-seater DHC-2 de Havilland Beaver with the 560 kW magni500 electric motor now took off on its maiden flight. MagniX presented this motor for the first time at this year’s Paris Air Show. With Harbour Air boss Greg McDougall in the cockpit, the retrofitted aircraft made a lap over the Fraser River from Harbour Air’s seaplane terminal in Richmond.

In theory, the electric aircraft’s 200 kWh battery should provide enough power for 30 minutes flight time (including 30 minutes reserve). This is sufficient for about 70 per cent of the 30,000 flights per year, according to an accompanying press release from the Canadian airline in March. Harbour Air’s route network connects Vancouver with islands in British Columbia and crosses the border to the US city of Seattle, where cooperation partner MagniX is based.

Harbour Air currently serves twelve routes and transports more than 500,000 passengers annually, according to its figures. The DHC-2 de Havilland Beaver is used throughout the entire route network. The partners describe the successful maiden flight as a significant milestone. As the next step, they announce that they will now tackle “the certification and approval procedures for the propulsion system and the further retrofitting of aircraft”.

MagniX made more specific comments on the approval procedure in spring: the Americans are striving to obtain certification for their engine and approval for the modification of the Beaver machines from the Canadian and US authorities by 2021. Only then will Harbour Air be able to begin retrofitting its nine other Beaver aircraft and introduce operation based on electric aircraft in 2022.