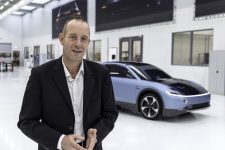 The Dutch solar car startup Lightyear has engaged former Tesla manager Johan Vos as Chief Commercial Officer (CCO). He will drive the commercialisation of the long-range solar car Lightyear One.

The longe-range solar car – which, according to Lightyear, allows a WLTP range of 725 kilometres – was unveiled as a prototype in June and is scheduled to go into production in 2021. The young company quoted a sales price of 149,000 euros. Lightyear’s CEO and co-founder Lex Hoefsloot and his top management have brought support to the board for the sales launch with former Tesla manager Johan Vos who recently joined Lightyear as CCO.

In his previous position at the Californian electric car manufacturer, the Dutchman was involved in the European market launch of the Model 3, among other things. When the Model 3 became one of the best-selling electric cars and greatly expanded Tesla’s presence in Europe, Vos’s team at Tesla grew from 500 to 2500 across marketing, sales, delivery and service. What the Californian company described as “delivery hell” was probably a good trial by fire for its management staff. Since then, not only Vos, but also Jochen Rudat and Jan Oehmicke have left Tesla.

In his new position at Lightyear, Vos is responsible for building up the sales structure so that the Lightyear One 2021 can be launched on the market. “Vos’ proven track record in fast-growing startups is an asset to grow the commercial organisation and to ensure a customer-centric approach around the delivery and service,” writes Lightyear.

“My goal is to accelerate Lightyear’s mission, through an organisation that provides a seamless journey for our customers; from order, delivery to highly valued services,” Vos says in the Lightyear press release concerning their new Chief Commercial Officer. CEO Hoefsloot adds: “Johan brings with him a commercial mindset and will contribute to integrating premium services into Lightyear’s value chain. The scaling of our commercial activities is a crucial part of reaching our ambitious goal: driving 9.5 trillion solar kilometres by 2035.”

Lightyear One is scheduled to start in 2021. The vehicle will be characterised by its efficiency, with its WLTP range of 725 kilometres and a relatively small battery. The company has not yet given further details on the battery capacity. However, the regular consumption of the five-seater, which is over five meters long, should be just 8.3 kWh/100 kilometres (83Wh/km).