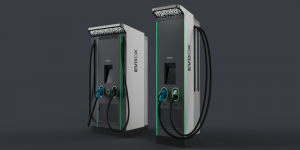 The Dutch charging infrastructure supplier EVBox has presented its EVBox Troniq 100 rapid charging station with up to 100 kW charging power at CES. In addition, the EVBox Ultroniq (up to 350 kW) has received a new design.

EVBox sees a need for charging possibilities with 100 kW charging power with the increasing spread of electric cars. The growing EV market means that “drivers want to be able to charge anywhere, whether at home, at work, at the supermarket, in front of a restaurant or on long trips to motorway service areas”.

However, ultra-fast 350 kW chargers will be sensible in some places more than others – such as motorway service areas, where a fast onward journey is the ultimate goal. With the Troniq 100, EVBox is targeting retail locations that want to offer their customers more than 50 kW, but do not need the 350 kW chargers because of the usual length of stay.

According to the manufacturer, the newly developed station has been designed for high reliability and is intended to provide full power continuously – the EVBox Troniq 100 operates at up to 200 amps. One step above that, the Ultroniq model should be able to handle currents of up to 500 amps. Nothing has changed in the technology of this model, but in the future, the Ultroniq will also receive the new design and control system of the Troniq 100.

According to the manufacturer, both stations have improved load management and should be able to use the available current as efficiently as possible. In addition, the larger touch screen is said to have increased user-friendliness, and the stations are also wheelchair-accessible with the lower-mounted display and the slots for the charging plugs. The new cable suspension system, which automatically retracts the cable, should also contribute to this – this should also increase durability.

EVBox does not mention prices in their press release. The Troniq 100 should be available worldwide from the 2nd quarter 2020, the Ultroniq from the 3rd quarter. Both quick-charging columns will be assembled in the factory in Bordeaux, which opened in November 2019 – EVBox says it plans to produce up to 450 units per month here.