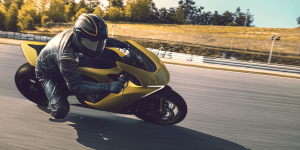 Damon Motorcycles from Vancouver, Canada has announced an electric motorcycle with impressive performance data at the CES. For the time being, however, only a premium small series is planned, a standard version will follow later.

The Damon Hypersport thus clearly surpasses currently available electric motorcycles in terms of range, which is due to the comparatively large battery. The standard battery from Zero Motorcycles comes to 14.4 kWh, Harley-Davidson uses a 15.5 kWh battery in the LiveWire. Only the Italian manufacturer Energica had announced an even bigger battery with 21.5 kWh for its 2020 models at the Eicma in November. The range here should be between 180 kilometres (highway) and 400 kilometres (city).

Some interesting features make the Hypersport stand out from other electric motorcycles. For example, an assistance system called ‘CoPilot’ uses radar sensors and cameras to monitor the motorcycle’s surroundings and can track up to 64 moving objects. If one of these objects comes too close to the route calculated on the basis of speed and direction, the system warns the rider of the danger via vibrations in the handlebars and LED lights in the cockpit. The CoPilot is to be designed in such a way that it feels intuitive for the driver.

Another new system is designed to solve the problems inherent in the concept of a sports motorcycle: comfort. The rider is usually positioned on the motorcycle in a fixed geometry trimmed for sportiness. However, this racing seat position is not suitable for commuting in the city or for longer journeys. Hypersport riders, therefore, use a shift system to move the windshield, handlebars, footrests and seat to various predetermined positions at the touch of a button – upright and comfortable in the city or aerodynamically flat on the highway.

Initially, a premium small series of 25 units is planned, which will cost 40,000 dollars and be delivered in 2021. A standard version at a price of 24,995 dollars will follow at a later date. According to the company’s website, the standard version “HS” will also have the co-pilot and shift features as standard. The differences are said to lie mainly in the conventional areas of the motorcycle: The Premier version will have suspension from Swedish specialist Öhlins and brakes from Italian brand Brembo. However, 15 of these motorcycles have already been reserved, ten are still available according to the company’s website. The reservation fee for the standard model is 100 dollars.

2 Kommentare zu “Canada now has its own electric superbike”