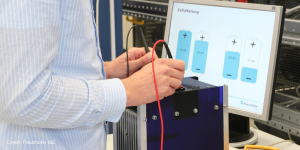 The NZP ceramics class promises high ionic conductivity, explains the Freiburg Fraunhofer Institute for Mechanics of Materials IWM in a press release. The name comes from the chemical elements sodium, zirconium and phosphorus contained in variable proportions in these ceramics.

The challenge: In general, the ionic conductivity of ceramic materials is lower than that of liquid electrolytes. According to the IWM, the unique structural design of NZP ceramics enables the existence of “migration paths” along which lithium ions can easily travel. Using atomistic simulations, Mutter has identified several combinations of chemical elements for NZP ceramics that are particularly promising.

“This computer-based research enables us to make definitive statements on the properties and stability of various chemical compounds without actually having to synthesise these compounds in a lab,” the researcher explains. The actual synthesis is expensive and requires resources.

The simulations were carried out on the mainframe of the Steinbuch Supercomputer Centre at the Karlsruhe Institute of Technology. They not only took into account the potential of the individual material combinations but also whether the chemical elements used were both non-toxic and abundant in the earth’s crust.

According to Mutter, the ceramic electrolytes, which are now composed of “relatively easily degradable” materials, could be tested in practice in a next step, “whether our predicted electrolyte materials significantly increase the ionic conductivity as expected and whether batteries consisting of them achieve a much higher energy and power density,” says the physicist.

In addition to the predictions around the potential electrolyte compounds, Mutter has contributed to “a better understanding of the atomic processes in NZP ceramics” as the IWM writes. Among other things, this involves the processes that promote or do not promote lithium-ion migration in certain material combinations. This should enable more sound statements about the ion conductivity of NZP ceramics.