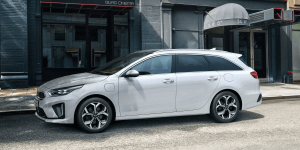 Kia UK has now opened the order books for the plug-in hybrid versions of the XCeed and Ceed Sportswagon. The XCeed PHEV will start from £30,695, the Ceed Sportswagon PHEV from £29,995 and deliveries are scheduled to start in April.

After Kia presented the two vehicles in September last year, the South Korean company is now releasing more concrete data on the two hybrid models. Most of the key data remain unchanged, with a 1.6-litre petrol engine, a 44.5 kW electric motor and an 8.9 kWh battery. The same drivetrain as the Kia Niro PHEV (or Hyundai Ioniq PHEV for that matter) is used in both compact PHEV models. The biggest difference is that the two Ceed derivatives have a lower standard consumption level, with provisional measurements showing a purely electrical range of up to 60 kilometres, although the official rating has yet to be released on both the fuel economy and CO2 emissions.

Kia has also speculated about releasing a fully electric Ceed at one point, which has been more or less confirmed with Kia’s newly-announced plans for an eleven battery-electric vehicle lineup planned by 2025.

For the UK release, the two PHEVs have been slightly modified, including a closed version of the grille, which is said to aid aerodynamic efficiency. In addition to updated infotainment features, the boot size was also reduced to make space for the charging cable – this is by around 150 litres for both models, with the Ceed Sportswagon losing slightly more space.