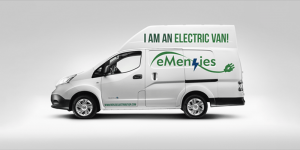 Menzies also now claims to have the UK’s largest all-electric vehicle fleet as well as the largest commercial charging infrastructure in the UK, although this probably includes the chargers they can access through their subsidiary Gnewt, which delivers parcels across London. The three new electric delivery vans are Nissan E-NV200s, which were modified with a Voltia conversion. The vehicles have arrived in Oban and are the first electric vehicles owned by Menzies operating in the Scottish network.

Although the British company has made a good start into electrification, the announced “electric start to 2020” will not end there. So far, the company estimates to have saved 2.3 million kg of CO2 compared to standard diesel delivery vehicles.

“Through Gnewt by Menzies Distribution, our electric vans have already delivered more than 10 million parcels emission free and we look to significantly increase that volume in 2020 as part of our green fleet strategy to introduce electric vans, powered by renewable energy to our UK depots,” says Adam Smith, commercial director at Menzies.