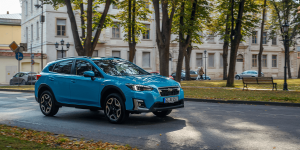 Subaru has defined its future technological focus with regard to emissions reduction. The Japanese company has confirmed its commitment to All-Wheel-Drive vehicles and Boxer type engines, while promising that, for example, by 2035 at the latest, all vehicles of the brand are to be equipped with either purely electric or hybrid drives.

Subaru has summarized its goals for cleaner vehicles in three steps: By 2030 the Japanese company is aiming to make at least 40% of Subaru global sales electric vehicles or hybrid electric vehicles (HEVs). In the next phase, by the first half of the 2030s, Subaru has the goal of using electrification technologies in all Subaru vehicles sold worldwide. This includes hybrid engines and excludes OEM vehicles supplied by other manufacturers.

As the automotive industry experiences rapid upheaval car sales are down across the board, most car companies are rethinking their strategies. Not only are customers buying fewer combustion engines, but they are also generally buying fewer cars full stop. The car industry is now being not only asked to step up for their environmental impact, but city spaces are being rethought for space and traffic flow a tendency – which favours more energy effective transport such as public transport and/ or micro-mobility in densely populated areas.

However, in its statement, Subaru underlined its commitment to large cars. President Tomomi Nakamura said: “Even in this once-in-a-century period of profound transformation, Subaru’s strong commitment and dedication towards car-manufacturing that we have cultivated throughout our history remain unchanged.”

Subaru summarises this sentiment in their press release detailing their emissions targets: “With the automotive industry entering a new era of mobility, Subaru will stay true to its commitment to delivering ‘Enjoyment and Peace of Mind’ to our customers.” Rather than focus on diversifying its product range beyond large cars, the Japanese company will “further evolve our core technologies of horizontally-opposed “Boxer” engines, all-wheel-drive (AWD) technologies, superior driving performance and safety, EyeSight driver-assist system and environmental technologies.” Subaru is the only company besides Porsche using “boxer” engines that are centrally balanced in the body of the car. The company has taken this principle when developing its hybrid-electric drives with what they call the “e-Boxer” used so far in hybrid drives.

Those wanting specific details about new models will be disappointed. Subaru president Nakamura did not reveal any details on either purely electric models or platforms. Interestingly the press release only mentioned BEV and HEV, presumably meaning that Subaru is not planning either fuel cell models or plug-in hybrids.

Last year Subaru joined forces with fellow Japanese company Toyota to build electric SUVs on a flexible platform, the e-TNGA. While their larger counterpart Toyota is extending its product range to include less space-and-energy consuming smaller cars and micromobility vehicles, Subaru for its part seems content to focus on large vehicles and AWD technology. Subaru will perhaps avail of Toyota’s smaller car range, but it seems compared to their European and North American counterparts, Toyota too is having a less voluminous approach to electric cars. Toyota is apparently planning worldwide sales of only 500,000 purely electric cars in 2025, which is only a fraction of what other automakers such as VW and Tesla are planning.