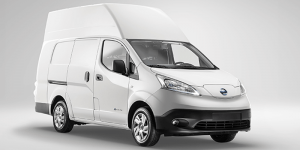 The so customised electric delivery van is best suited for “last mile” deliveries in urban areas, claims Bevan, however, the 2.2 tonne Nissan e-NV200 is also capable of serving longer routes with a range of 200 km and 80 kW electric motor. So far so standard, yet Voltia’s conversion features walk-in rear doors and a load volume of up to 8m3, which is virtually twice that of the standard e-NV200, says Bevan. The Groups also offers a variant with 6m3 cargo area that has a 580 kg payload capacity

The conversion was developed in “close co-operation” between Nissan and Voltia.  Customers benefit from the chassis manufacturer’s standard warranty, while Bevan will back the bodywork with its five-year cover.

Voltia is based in Slovakia and claims that hundreds of its converted Nissan e-NV200s are already in operation across the Continent, with many more on order. One recent client is France’s Chronopost for example, and London-based Gnewt also operates adapted Voltia e-vans reportedly. However, the high costs associated with importing finished vans to the UK have restricted domestic take-up, which is where the deal with Bevan comes in.

Voltia CEO Juraj Ulehla was proud to add local manufacturing capacities, where the Brexit uncertainty still reigns strong: “This partnership will enable us to smooth the process of delivery to the UK market, even post-Brexit. It’s a ‘win-win situation’, and we’re confident customers will appreciate the benefits.”

Production is to commence before the month is out at Bevan’s site in the town of Wednesbury and the company is aiming from launch to complete ten vehicles each week. Bevan Group will be converting Nissan chassis using imported panels and components supplied by Voltia. Ultimately, however, it plans to recruit an EV-dedicated workforce, creating up to 20 new jobs, and cut costs further by manufacturing all of the parts ‘in-house’.

Until production gets rolling, prospective clients may try the electric vans from a fleet of demonstration vehicles now available.