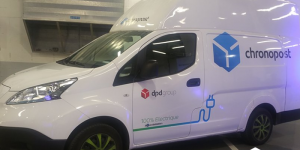 The french parcel service Chronopost, who belongs to the DPD Group, has ordered 100 electric transporters from the Slovak Voltia. The acquisition is part of Chronopost’s plan to eventually deliver packages in Paris on a completely electrical basis.

The electric transports made by Voltia have a range of up to 200 km and are based on the Nissan e-NV 200, but have doubled the storage space to 8 m³ and added back-door access. The load capacity is set at 600 kg by the manufacturer, who is seated in Bratislava.

The 100 vehicle order is the largest single order for Voltia so far, who has sold their electric transporters to customers in Austria, Czech Republic, Estonia, France, Germany, Holland, Slovakia, Ukraine and the UK. The company is concentrating on the market for light electric utility vehicles and is competing with companies such as DHL, who recently launched a campaign to sell their Streetscooter transporter.

Chronopost has combined their order with the opening of another logistics center in Paris, to move distribution closer to the city center for future operations and provide efficient and clean services to its customers. By the middle of 2019, the company plans to expand their delivery service to the greater Paris area.