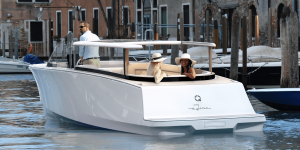 Q-Yachts presented the concept of a fully electric boat for commercial use at the BOOT trade fair in Düsseldorf, Germany. The Q30 Water Limousine concept will be offered both as a battery-electric version and with fuel cell technology.

The Finnish electric boat manufacturer has designed the boat for passenger transport. It is the answer “to clear market demand for a zero-emission vessel capable of transporting people in crowded cities and sea areas in an environmentally friendly and efficient way”, according to an accompanying press release by the Finns.

The 9.3-metre long and 2.2-metre wide Q30 Water Limousine will be available as a battery-powered boat with a 30 kWh or 60 kWh battery. In the FC version, it will have 60 to 120 kWh. Two 10 kW engines will power the ship. With up to four people on board, the model will have a maximum speed of 12 knots and a maximum range of 42 nautical miles (30 kWh version) or 136 nautical miles (120 kWh version). When fully loaded – meaning all nine persons on board – these values are relativized to 10 knots top speed and 24 or 96 nautical miles.

As a characteristic feature of the Q30 Water Sedan, the Finns cite the hydrodynamically optimized hull of the boat, which was specially developed for slow to medium speeds of up to 15 knots. “We are excited about the opportunity to offer cities and resorts a sustainable and economically viable solution for the transportation of passengers and guests,” says company boss Joakim Hildén. The Q30 Water Limousine, he says, enables emission-free passenger transport with almost completely quiet and minimal wake.

As early as 2018, Q-Yachts had announced the development of a fully electrically powered yacht with a minimalist design. The model also called Q30, but without the addition “Water Limousine”, was announced at the time with similar performance data, but differs significantly in some points from the appearance of the model now shown.