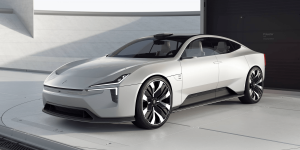 Polestar has shown a foretaste of future electric models of the brand under the name Precept. The concept is a fully electric four-door Grand Tourer, which will be presented at the Geneva Motor Show in March.

The Volvo subsidiary sees the concept car as a “clear expression of Polestar’s intention as a brand”. “Precept is a statement, a vision of what Polestar stands for and the relevance of the brand,” says Thomas Ingenlath, CEO of Polestar. “The car is a response to the clear challenges currently facing our society and industry”. The concept is not a “distant dream of the future”, but a realistic preview of incoming vehicles.

With the Polestar 2, the Swedish company is already banking on a sedan rather than the industry-popular SUV for their first electric model (the Polestar 1 is a PHEV). With a long wheelbase of 3.1 meters, the Precept is intended not only to enable the slim silhouette of the Grand Tourer, but also to create space for a correspondingly large battery – without affecting the space for the passengers.

The front bears a rather striking design, not only because of the bold LED headlights with a new interpretation of Volvo’s typical daytime running lights. The radiator grille, which is superfluous in electric cars, is replaced by a “SmartZone”, in which the designers placed the car’s sensors behind a transparent panel. But there are also sensors outside the “SmartZone”: A lidar pod is mounted on the glass roof, which requires the exposed position for a good all-round view.


Overall, great importance was attached to sustainability. Using aerodynamic tricks (beyond the omission of the classic exterior mirrors), air resistance is also reduced, and sustainable materials are increasingly finding their way into the interior. Interior trim and backrests are made of flax-based composite materials (according to Polestar, 50 per cent lighter and 80 per cent less plastic waste), and recycled materials are used for seats and upholstery. For example, PET bottles, cork and fishing nets are to replace leather, wood and chrome.

Polestar has not given any technical details about the drive system in the corresponding press release – apart from the fact that the Precept is a battery-electric car. A video published by Polestar shows a display of 500 kilometres range – at 80 per cent charge level. That would give a total range of 625 kilometres.

Polestar continues its cooperation with Google in the infotainment sector: the 15-inch touch screen and the 12.5-inch driver’s display run on Android. According to Polestar, the partnerships guarantee “the concentration of technical expertise in various areas in the vehicle”. Eye tracking, for example, is intended to capture the driver’s gaze and use it to control the screen elements. An example: If the driver is looking at the road, the elements on the driver’s display are darkened slightly to reduce distraction – if they lower their gaze on the display, all important information is highlighted.