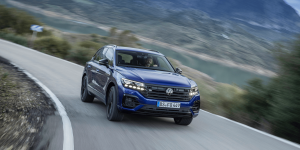 In doing so, VW is following Porsche’s in-house example, where the sportiest versions of the Panamera and the Touareg Cayenne heavy-duty model have been available as PHEVs for several years. From the Cayenne e Hybrid, the Touareg R also takes over the drive. This offers a system output of 340 kW and includes an electric motor with 100 kW and a battery with 14.1 kWh energy content.

The Touareg R is the first PHEV model from Volkswagen R and can be driven electrically at speeds of up to 140 km/h – above that the V6 petrol engine kicks in. If the driver does not make use of the E top speed, Volkswagen says they should be able to cover the distances undertaken by most commuters purely electrically in everyday life. However, the Wolfsburg-based company does not give an exact value for the E-range. It is striking that the Touareg R has no E license plate in the published pictures. This means that it either emits more than 50 grams of CO2 per kilometre in the WLTP or does not manage the minimum range of 40 kilometres.

The 14.1 kWh battery sits under the boot, VW has not given any details about the charging power in the short press release – Porsche mentions a value of 7.2 kW, at a corresponding charging station the battery is charged in 2.4 hours.

In return, Volkswagen’s PR department mentions the Touareg R assistance systems in the corresponding press release: not only should it be able to pull up to 3.5 tonnes, but the Trailer Assist also provides assistance when manoeuvring with the trailer (also possible purely electrically). In addition, the Touareg R is the first model of the brand to be driven with Travel Assist up to 250 km/h. VW itself states that top speed is less important than the fact “that the most recent Travel Assist generation reflects the ever-higher development standard of Volkswagen’s systems on the way to autonomous driving”.

While many will certainly form their own opinion on this, another paradigm shift is clear: With the Touareg R, the currently most powerful Volkswagen has been electrified. And while in the first generation of the SUV, the R model was still a V10 diesel from the times of Ferdinand Piëch, plug-in hybrids with the R label will be sold in future. And soon possibly even more, VW is also saying that they have plans for an all-electric sports car based on MEB, which will incorporate the findings from the ID.R racing car.

Back to the Touareg: VW does not yet make any statements about the exact operating modes of the hybrid. But the driver should be able to control the battery charge level via the hybrid menu in the infotainment system. When route guidance is active, the battery manager also takes into account road and topography data in order to maximise the electric range.

VW is not yet quoting prices for the Touareg R, but it is expected to be launched in the second half of the year. Currently, prices start at 60,130 euros for the V6 diesel, 63,505 euros for the V6 petrol engine and 89,825 euros for the V8 diesel. As a top model, the Touareg R is likely to be positioned above the large diesel – and would thus be almost on a par with the Porsche Cayenne e Hybrid, which starts at 91,684 euros. Only one thing is certain: The Touareg R does not qualify for the German environmental bonus at these prices.