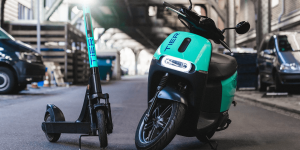 Until then, Tier Mobility wants to create the technical prerequisites to enable the lending of the former Coup scooters in addition to its existing electric scooters in the Tier app. After the start in Berlin, the new service is to be offered in other cities as well, as Tier writes in a press release. There the company spoke about the development of a multimodal offer – Tier wants to offer users further forms of mobility (in this case for longer distances) beyond the already announced electric scooters.

It is not known what Tier Mobility is paying for the 5,000 electric scooters and how many of them will be used in Berlin. However, Tier announced only a few days ago that it would increase the current financing round by almost 40 million euros.

The service coup financed by Bosch had announced its end at the end of November 2019, after a new pricing model with partly significantly higher prices did not allow “long-term economic operation”. By the end of the year, the fleet consisted of the aforementioned 5,000 vehicles – in Berlin, Paris, Madrid, and Tübingen.

Tier Mobility sees itself in a position to operate the fleet economically – for example, because of the existing customer base or synergies in charging logistics. “We have gained valuable experience with e-scooters and can now use this effectively in the field of e-mopeds,” says Lawrence Leuschner, CEO and co-founder of Tier Mobility. “Many customers want a slightly faster vehicle for medium distances of 4 to 10 kilometres. Now we can now offer these people a very good deal with high-quality vehicles”.

Another takeover could also play an important role for the Berlin-based company’s economic operation: According to media reports, Tier took over the British start-up Pushme in January, which developed replaceable batteries and a network of exchange stations. Coup had recently described maintenance and the effort required to replace batteries in particular as “too cost-intensive”. Even an attempt to use special offers to encourage users to exchange batteries themselves has apparently not brought about the turnaround for Coup.

According to media reports, none of the 120 Coup employees is to switch to Tier Mobility on the basis of the takeover agreement – meaning that the deal likely only concerns the vehicles. According to the report, Tier currently has 450 employees. Tier does not give any details about the size of its own fleet of electric scooters, but according to the strategy consultancy Civity, Tier Mobility probably has around 25,000 vehicles.