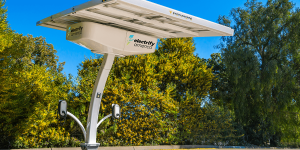 Electrify America has announced the construction of 30 solar-powered charging stations in rural California that are not connected to the power grid. The VW subsidiary launched after DieselGate is spending around two million US dollars on this initiative.

The investment will expand access to sustainable charging for electric vehicles for drivers in rural areas, including the Central, Coachella and Imperial Valleys, the company said in a statement. The chargers will be supplied by Envision Solar. Installation of the Solar chargers is scheduled to begin in the first half of 2020.

The EV ARC 2020 charging stations will allow charging in remote locations, but will not provide the rapid charging normally found at Electrify America: The maximum charging capacity is 6 kW, which is due to the design of the system. It consists of a solar roof with an output of 4.28 kW and a stationary 32-kWh storage tank that supplies two charging points with electricity.

The advantages of the solar charger are that it is not only independent of the power grid, but also requires no special substructure. According to Electrify America, it takes only a few minutes to set up. Since the charging station fits on two standard parking spaces, the remaining parking spaces remain available.

“Along with supporting California’s broader air quality goals, this investment expands reliable, low-cost charging solutions to California residents living outside of major metropolitan areas – further demonstrating that electric vehicles are for everyone,” said Giovanni Palazzo, President and Chief Executive Officer of Electrify America. Desmond Wheatley, CEO of Envision Solar, says that in California, electric cars already account for eight per cent of sales in 2019, but in rural areas the figure is less than half a per cent.