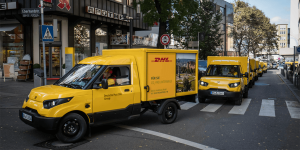 Deutsche Post/DHL has announced that they will cease the manufacturing of their StreetScooter electric vans before the end of this year. The Group’s CEO Frank Appel has given up on finding a buyer for its subsidiary, even though it looked as if a deal with China’s Chery was as good as made.

A spokesperson for the postal service told the German press agency dpa: “There will be no more new orders. The ordered vehicles are still being produced, and deliveries are expected to continue into next year.” Deutsche Post/ DHL also announced that it no longer wanted to pursue the exploratory talks for a buyer. CEO Appel simply stated that “further scaling without the right partner does not correspond to our long-term strategic objective”. He added that “we have always said that we do not want to be a car manufacturer”.

In future, StreetScooter wants to concentrate on the operation of the current fleet alone, which comprises 11,000 electric vans and is to be expanded to 15,000. What this means for the employees in the StreetScooter manufacturing plants in Aachen and Düren is currently still unclear.

Besides the two plants of its own in Aachen and Düren, Germany, and StreetScooter also has a production facility for the Ford Transit based Work XL at Ford in Cologne. A Deutsche Post spokesperson told electrive that talks will be held with Ford about this, but “a continuation of the production of the Work XL” is “not planned under the current circumstances”.

This also puts the departure of CEO Jörg Sommer in a different light. Sommer, who joined the company in 2019, had the task of finding a buyer and expanding the company’s international potential, all of which appeared to have been going well. At the beginning of February, however, Deutsche Post announced that Sommer had left StreetScooter because of “differing views on the future direction of the company”.

Although Appel described the subsidiary as a “success story” last October, he now says that in view of the “current global economic uncertainties”, Deutsche Post has decided to “not actively pursue the sales resonance”. According to its own statements, the Coronavirus crisis has hit the German postal service hard, especially with regard to logistics and delivery services to and from China. In the month of February, this has cost the company around 60 to 70 million euros. This appears to have been the last straw for the CEO since Appel was famously impatient with the sale of StreetScooter. Also in October last year, he reiterated that the subsidiary must be sold by the end of last year. Up until today’s announcement, the sale of the company still seemed to be on the table.

Less than six months ago, StreetScooter and Chinese EV manufacturer Chery signed a letter of intent for a joint venture during German Chancellor Angela Merkel’s trip to China. Back then, in September, Chery and StreetScooter announced that they wanted to set up a joint venture in China. The aim of the cooperation was to jointly develop an electric commercial vehicle especially for the Chinese market and other selected countries. The letter of intent paved the way for gradual entry into the Chinese market for electric commercial vehicles. Series production in China with production capacities of up to 100,000 electric vehicles per year was planned for 2021.


Despite StreetScooter apparently being so close to being sold to the Chinese joint venture partner Chery in January, this is not going forward. “With the decision announced today, we will also not continue the planned cooperation with the Chinese partners,” said a Deutsche Post spokesperson at the request of electrive adding: “Whether Chery will build electric vehicles in China is beyond our knowledge.”

The two factories with a supplier structure and the established customer base with major customers such as Deutsche Post and recently Amazon would probably have been the more interesting points of the deal for Chery. Chery itself has sufficient experience in building e-vehicles, as the manufacturer has a relatively high e-quota among the established Chinese OEMs. It remains to be seen just what was unattractive about the deal for Chery and if this existing German infrastructure will be utilised by any other manufacturer in any way.

USA markets will not get to see StreetScooters as planned

In November Deutsche Post/DHL announced that StreetScooter would launch the StreetScooter Work L electric delivery van in two US cities from spring this year. According to CTO Ulrich Stuhec, StreetScooter’s EVs could be established on a large scale in the USA in 2022 or 2023. The market entry into the USA, which was planned for spring 2020, is therefore now officially quashed.

Deutsche Post is now currently covered for its own fleets, with Appel reiterating that “we are committed to our 2050 mission, which is zero-emission logistics by 2050.” And as StreetScooter will not be wound up, but be the operator of the existing fleet, the move is expected to result in “one-off adjustment expenses of between 300 million euros and 400 million euros”.

Ramifications for German industry and government?

Deutsche Post was a state-owned corporation until the reunification of Germany in 1989 where it began a process of privatisation. StreetScooter started up in 2010 to respond to the demand for electric delivery vans, specifically from Deutsche Post who was decarbonising its fleets. At the time, no vehicle manufacturer in Germany was serially producing a battery-electric delivery van, literally forcing Deutsche Post to make their own. In December 2014, Deutsche Post bought the company, which thus became a wholly-owned subsidiary.

The fact that things are not going too well between the Post headquarters in Bonn and the StreetScooter management had already become apparent in autumn. Shortly before the premiere of the second generation of the Work L, Post boss Frank Appel publicly set a deadline by saying in an interview that he was aiming the sale of the subsidiary by the end of 2019. “Our investors want a logistics company, not a car company,” Appel said. He accentuated the fact that StreetScooter would incur a loss in 2019 with a “significant double-digit million euro amount”.

Plans for what will happen to the StreetScooter plants and expertise developed so far was not even mentioned in the Deutsche Post announcement. In October last year, The Federal Ministry of Transport opened an initiative for supporting hydrogen mobility with a further 23.5 million euros as part of the National Innovation Programme Hydrogen and Fuel Cell Technology (NIP). The largest amount of almost ten million euros went to the Post subsidiary StreetScooter for 500 fuel cell vehicles. What will become of these vehicles and the existing developments and facilities is also not clear.

As yet, there have also been no statements from the German government concerning the ramifications for German industry, struggling to find a leading position in electric vehicle markets in the face of an inexorably declining car industry. It remains to be seen what will be made of the hole in German manufacturing capability and how German transport industry aims to develop and support its growing markets in a rapidly changing vehicle industry.

Update Thursday 5 March 2020: One of the original founders of StreetScooter, professor Günther Schuh is considering buying back the electric delivery van company from Deutsche Post. “Under the right conditions, I could imagine taking over StreetScooter again,” Schuh told WirtschaftsWoche. Schuh told the newspaper he had contacted the post office and asked if he could do anything “to limit the damage”. “We are talking now,” said Schuh.

When asked what the end of the StreetScooter means for Germany as a technology and start-up location, Schuh answered: “It frustrates all pioneers who want to try something impossible. If we only ever let projects go through that are on a par with savings-bank loans for multi-family house financing, we will not make any progress. ”

Schuh, a renown innovator in the German transport industry, is also CEO of electric vehicle startup e.Go Mobile. It seems that innovative German startups in vehicle manufacturing have very specific hurdles. On one hand, startups langer in the shade of the significant number of carmaking giants who – until now – have been printing money since the global suburban spread of the 50s. On the other hand, German innovation in mobility is held back by a financial culture in Germany that is characterised by safe and small bets. Schuh recently criticised German financing culture with regard to e.Go Mobile. This was echoed by sentiments from the German car startup Sono Motors who were forced to further their innovation to include an unprecedented financing strategy – Sono Motors recently used crowdfunding to raise the 50 million euros required to start production of their solar-powered car.