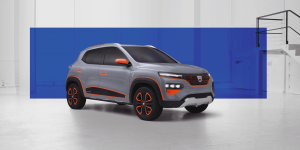 Renault released a preview of the first electric model of the Dacia brand with the show car Dacia Spring. As expected, this is a modification of the Renault City K-ZE that is being offered in China at competitive prices.

The Dacia version should have a range of 200 kilometres in the WLTP cycle and will be available from next year onwards. As was expected, Dacia has kept design modifications within limits, while the lighting graphics and the shape of the radiator grille are the same as the Renault City K-ZE.

On the newly-released renderings, the Dacia Spring sports some orange design elements, making the small electric car a bit more stylish. Although the car is aimed at being affordable, it certainly does not look cheap. In one point, however, the Dacia study differs from the Renault production model: the lower lights in the air intakes in the Dacia consist of six LEDs, while the City K-ZE apparently uses halogen here.

The Spring is described as being Dacia’s first city car. The Romanian subsidiary Dacia and its French parent Renault say they are targeting the small electric car at both mobility services as well as private ownership. The fully electric four-seater offers a range of 200 kilometres which they say should make for stress-free driving over both inner-city and suburban distances. Whereas the City K-ZE, is supposed to have a range of 271 kilometres, this was calculated in the unrealistic NEDC. Therefore the 200 WLTP kilometres might indicate that no major changes have been made to the engine.

Since Renault has not provided further technical data in the Dacia Spring press release, we will assume that many of these details will be similar to the Renault model with an electric motor output of 33 kW and battery energy content of 26.8 kWh. It remains to be seen how the Dacia can be charged, as the City K-ZE uses the Chinese GB/T charging standard. Dacia so far only writes that the Spring should be “easy to charge” and require “very little maintenance”.

So far Dacia only states the planned market launch in 2021 and has not yet released prices.

Update 14 May 2020: The Dacia Spring will share not only the technology with the Renault City K-ZE, but also the factory: The first all-electric model of the Dacia brand will be produced in China and launched in early 2021, reports Automotive News. The Dacia Spring, which was presented as a concept in March, will be produced by eGT New Energy Automotive, the Chinese joint venture of Renault and Nissan with Dongfeng, in Shiyan in Hubei province.

According to Automotive News, Dacia will offer Spring to both private customers and mobility services. Especially through car-sharing fleets, Dacia could quickly reach high volumes of the electric car in order to avoid CO2 penalty payments to the EU. The Dacia brand’s previous concept of using proven Renault Nissan technologies (which have been written off in the development costs) and thus offering its vehicles at a low price is reaching its limits when it comes to CO2 targets. These are hardly possible without electric cars.

The price for the Spring is not yet known. The Renault Group announced in April that it would stop selling cars with combustion engines in China and concentrate fully on electric cars and light commercial vehicles.

Update 19 October 2020: The rumour that the Dacia Spring is to be built in China has now been confirmed a few days after its world premiere in Paris. The source of the information is Dacia’s Marketing Director Mihai Bordeanu. “The Renault group did the engineering part on an alliance platform,” Bordeanu told hotnews.ro. “Production is in China, which is the largest market for electric cars, has a fully developed ecosystem, and allows us to bring Spring to Europe as soon as possible”. The Spring will be produced by eGT New Energy Automotive, the Chinese joint venture of Renault and Nissan with Dongfeng, in Shiyan, China where its sister model Renault City K-ZE, sold in China, also rolls off the assembly line.

BMW’s i4 heads towards series production

2 Kommentare zu “Renault allows a peek at the Dacia Spring”