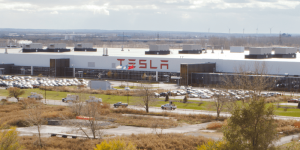 On Thursday, a report in a German newspaper had revealed that Tesla had ordered back to the USA about 30 American employees who had coordinated the construction of the Gigafactory in Grünheide from Berlin. As the company later told local TV rbb24, however, the relocation to Grünheide would not be affected by the corona crisis. The teams in Europe and the USA were in constant communication with each other, so there would be no delays, writes rbb, citing Tesla circles.

According to the report, the planned event in Erkner on 18 March, where objections to Tesla’s plans are to be discussed, will also take place, according to a spokeswoman for the State Environment Ministry. However, it is not clear which Tesla representatives will be present.

The Brandenburg Ministry of Economics, however, assumes that the ground-breaking ceremony will take place around Easter in mid-April. This is what State Economics Minister Jörg Steinbach told reporters. At the beginning of March, Steinbach had still been talking about the second half of the month; this date has now apparently been postponed somewhat. Even though Tesla has already started the planning work at its own risk based on the preliminary approvals, there is still criticism of the quick procedure.