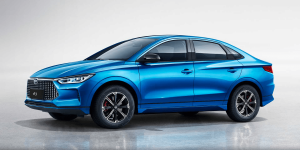 The Chinese electric car and battery manufacturer BYD has published its preliminary results for the 2019 fiscal year. At just under 121.8 billion yuan, sales were on a par with the previous year, but profits slumped by 42 per cent to around 1.6 billion yuan.

Converted into euros, sales amounted to around 15 billion euros and profits to 210 million euros. BYD also attributes the declining profit to the reduction of subsidies in China. The manufacturer sold a total of 229,506 electric cars and plug-in hybrids in 2019, which makes 7.39 per cent less than in 2018.

After the subsidies were cut in mid-2019, NEV sales slumped not only for BYD but at all manufacturers. Over 2019 as a whole, NEV sales in China had only fallen by four per cent due to the strong first half of the year.

“In (the) short term, the decline in new energy automobile subsidy will certainly contribute to the profit pressure on related companies,” says the BYD annual report. In the long term, however, the change in guidelines will help the industry to rationalise and become more competitive and healthier.

But rising costs for research and development will also put pressure on profits in 2019. Last year, BYD launched numerous new BEV and PHEVs. In some regions of China, the models have to be prepared for the China VI emission standards. BYD is also working on internationalisation to become more independent of the Chinese market. Under the new sub-brand FinDreams, components are also to be sold outside China. For the new generation of BYD Han, the Group has also developed a new LFP battery, named the blade battery, which will also be sold to third parties.

The domestic market will nevertheless remain very important for BYD. Here, the government has held out the prospect of an extension on subsidies for New Energy Vehicles until 2022, which was originally limited to the end of 2020, in order to stimulate the market after the corona crisis. According to media reports, however, the current subsidy rates could be further reduced.

Volkswagen is gearing up for PHEV business