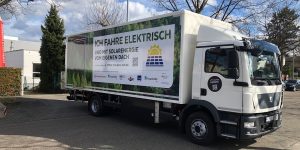 In the ‘Lade PV’ charging project, four industrial companies and two Fraunhofer Institutes aim to demonstrate the marketability of photovoltaic applications in freight transport. They also want to convert an electric truck into a demonstration vehicle.

To this end, the project, led by Fraunhofer ISE, will develop an overall concept that will enable the widespread use of integrated PV modules on electric and other commercial vehicles with a payload of more than 3.5 tons. In a press release, Fraunhofer ISE puts the potential for reducing CO2 emissions from heavy goods vehicles in the EU at 5 to 7 per cent.

“Trucks provide lots of area with great sun exposure, and electric-drive vehicles are equipped with large batteries. This combination presents an ideal situation for generating valuable onboard electricity with photovoltaics. This increases the driving range, and all of that is provided with 100 per cent renewable energy,” says Harry Wirth, division manager for photovoltaic modules and power plants at Fraunhofer ISE.

Two application cases are being investigated – retrofitting on the roof and full integration of the solar modules into the vehicle body. In the latter case, the requirements for Vehicle Integrated PV (VIPV) modules are very demanding, according to Fraunhofer ISE. They should achieve a surface utilization factor of more than 90 per cent, be vibration-resistant, shear and bend resistant and easy to install. Also, they should have additional weight of no more than 2.6 kilograms per square meter.

In addition to the requirements for the modules themselves, there is also the installation in the vehicles, where the installation space for modules, controls and cable routing is limited. For the production concept, the Fraunhofer researchers are working together with Sunset Energietechnik, where an existing production line is also being converted. The module prototypes are integrated into the box bodies of commercial electric vehicles by TBV Kühlfahrzeuge GmbH. For the connection of the solar modules to the existing electric bus systems of the commercial vehicle, the project partner M&P motion control and power electronics GmbH develops, tests and certifies the power electronics components for the use on the demo vehicles. The demo vehicle, an electric truck from Framo, will be installed at Alexander Bürkle GmbH & Co. KG for daily distribution operation in the Freiburg area.

For the practical test, the Fraunhofer Institute for Transportation and Infrastructure Systems IVI is developing an energy forecast model of the vehicle. With this model, it should be possible to predict the range, charging times and power generation for different routes depending on the consumers in the vehicle and the PV power generation. The model will be used around Freiburg to determine the irradiation potential of the routes travelled. The performance development and stability of the modules under real conditions will also be regularly checked, according to Fraunhofer ISE.

“We not only want to develop the technology but also demonstrate that trucks can use onboard PV to meet over five per cent of their energy demand,” says project manager Christoph Kutter. “Calculations show that four to six thousand kilometres additional driving range per year are possible. Vehicle-integrated PV (VIPV) is worthwhile for manufacturers and operators of solar electric commercial vehicles.”