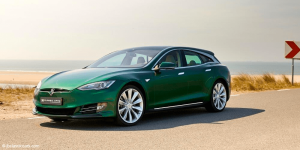 The Model S design initially announced in 2017 is now going on sale and has indeed turned the Tesla into a real ‘Shooting Brake’. However, the strictly limited offshoot from Dutch coachbuilder RemetzCar cost an impressive 224,522 euros.

The company originally made headlines with the presentation of a Tesla modified into a hearse, from where they have evidently decided to go in a more conventional, but nonetheless striking direction. Originally, only 20 units of the modified Tesla were to be built, but the development cost ended up being too high, so that the car with the station wagon remains a unique piece.

Elon Musk has enough of staying (and having a) home

Too cute to be true