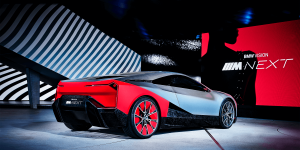 The Vision M Next hybrid concept presented by BMW last year was touted as the presumed successor to the i8 sports car, giving a glimpse of the electrified future of the BMW M brand. Now BMW has apparently put a stop to the plans because of the Corona pandemic.

The Vision M Next will probably remain a study and not go into series production, reports German car magazine Auto Motor und Sport and the BMW Blog. “Because of the corona crisis and the resulting slump in profits, BMW will forego a prestige object with low sales figures,” writes the AMS, but without naming a source. “So M Next remains what it was – a study, nothing more.”

The BMW Blog refers to its own sources within the group and to the Manager Magazine for its article. There it says, however, that the plans were stopped “some time ago” – that is, before Corona and its effects on carmakers. According to the article, the reasons were “mainly in the costs and the volume”. BMW had sold about 17,000 units of the i8 since 2014, and 1,700 units of the i8 Roadster, which was introduced in 2018. “The BMW Vision M NEXT would be very expensive to make and likely wouldn’t net the desired sales results to keep it alive,” the blog writes.


The concept car was developed and presented under the then BMW CEO Harald Krüger and is a preview of a sporty plug-in hybrid. In the concept, a four-cylinder petrol engine drove the rear axle, while an electric motor could be switched on at the front axle. BMW spoke of an “electric four-wheel drive” when it presented the concept car. According to this, the system output was to be 441 kW and enable sporty driving performance (top speed 300 km/h, acceleration 0-100 km/h in less than three seconds). The range in purely electric driving mode was specified as up to 100 kilometres.

In terms of concept, the Vision M Next resembles the i8, which has since been discontinued – but should not be more focused on the sporting aspect just because of the “M” in its name. The i8 was repeatedly criticised for being neither a real eco-car, nor a real sports car, with its narrow tyres and, in the opinion of many BMW fans, a three-cylinder engine that is too weak. With the Vision M Next, which is basically a slightly shortened, further-developed i8 with wider tyres, BMW would have continued the concept of the existing model.

BMW had already described the Vision M Next as a “study without series production” at the presentation and only provided sparse information on the technical data. The only details released were the system performance details, but not separate values for the gasoline engine and the electric motor or any information on weight of the car. The primary task seems to have been to test reactions to the design somewhere between the i8 and the classic BMW M1.