Sweden’s passenger car market slumped by 36.9% YoY in April due to Covid-19. Nevertheless, electric and plug-in hybrid registrations achieved a market share of 21.6% – a trend that has been evident since the beginning of the year.

There is no doubt that the direct comparison of the data sketches a distorted picture due to the current exceptional situation, both in a monthly and year-on-year comparison. Keeping that in mind, let’s continue with the figures: Of the 19,831 passenger cars registered in Sweden in April, 5.3 per cent were equipped with battery-electric and 16.3 per cent with plug-in hybrid drive. In the previous month, the market shares were 10.5 and 16.7 per cent respectively.

In absolute figures, registrations of BEVs and PHEVs fell in comparison with March 2020 from 3,015 to 1,049 and from 4,753 to 3,233 respectively – a drop of 65 and 32 per cent respectively. This slump can be observed in all European countries: In Germany, too, the registration figures for plug-in vehicles and passenger cars also fell massively in April.

However, with a market share of 21.6 per cent, plug-in vehicles are still in great demand in Sweden compared to vehicles with conventional drives. Compared with April 2019 (10.1 per cent), the share has doubled. The background to the new registration boom is primarily a change in the Swedish bonus-malus system that came into force at the turn of the year. According to Statistics Sweden, this system will have an impact on new registrations throughout the year. 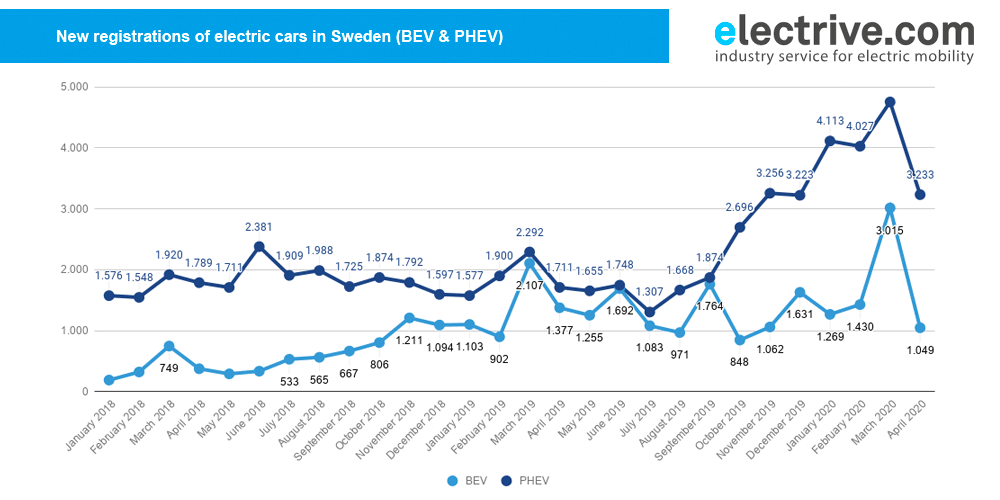 The most popular BEV models in April were the Renault Zoe (159) and the Audi e-tron (146). The Tesla Model 3, which was still at the top of the list last month, did not make it into the top of the list– which was a little influenced by the stuttered deliveries made by the Californians. Among the PHEV models, the Volvo S60/V60 (429), the VW Passat (410) and the Kia Optima (254) were the bestsellers.

The e-boom (especially for PHEVs) is due to the bonus-malus system. Although this system has basically been in force since 2018, a change that comes into effect on 1 January 2020 will measure CO2 emissions according to the WLTP cycle – here, consumption and CO2 values are on average 20 per cent higher than in the NEDC that was used previously. In concrete terms, new cars with CO2 emissions of less than 70 g/km will receive a bonus of up to €5,700 (graduated in various stages between 0 and 70 grams), while vehicles with CO2 emissions of more than 95 g/km will be subject to higher taxes as a malus.