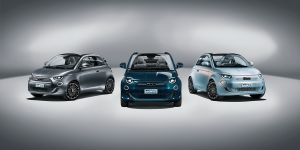 Buyers in the UK may now put an order in for the first 500 of Fiat’s extra compact electric car 500e. Prices for the limited ‘La Prima’ edition come in below the 30k threshold after government subsidies.

Fiat has now released UK pricing where the electric 500e will start from £29,500 after the £3,000 plug-in car grant (PiCG) is applied. That’s for the first 500 high-spec ‘La Prima’ first-edition models, with less expensive models to follow. Buyers can expect deliveries in late 2020 or early 2021, according to Fiat.

Fiat markets the new 500e as the only all-electric convertible and deems it “La Prima” meaning first in Italian. It is indeed the first electric car by the Italians seen in a long time. The previous Fiat 500e, released over five years ago, turned a flop. Now, however, Fiat Chrysler has to catch up on electrification and has dedicated an entirely new platform for the small electric car. Besides, Fiat and FCA chief marketing officer Olivier Francois declared that “premium is the way we will go with the EV 500” and called it a “kind of an urban Tesla”.

The premium does not come in cheap, of course, and seems an unusual positioning for what is essentially a small city car. However, Fiat says the La Prima edition is £1,400 cheaper than the highest-spec Mini Electric and offers a more extended range of 199 miles from a 42 kWh battery. Also compare it to the Honda e: The 100 kW version starts in the UK at £26,160, the 113 kW version at £28,660 after subsidies but offers no more than 220 km of range.

In other models, Fiat is also working on an all-electric version of the Panda. The compact electric car will utilise the same platform as the Fiat 500e.

Orders for the Fiat 500e La Prima are now open across the UK.