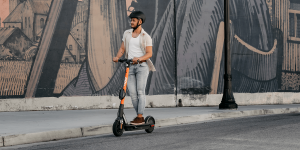 Spin, the electric scooter supplier acquired by Ford at the end of 2018, has announced its expansion into Europe. The company will launch its first international fleet in Cologne this spring, with other European cities to follow soon after.

Through its parent company Ford, Spin has now announced that it will launch its first fleet of dockless electric kick-scooters in Europe, starting with the city of Cologne in Germany this spring. Other German cities will follow soon after. Spin’s plans for international expansion also include applying for the upcoming Paris e-scooter share permit in France next month. UK is to be another targeted market, where Spin intends to “explore opportunities” including private partnerships and pending electric kick-scooter sharing trials.

After an initially rocky beginning in the disruptive field of micro-mobility, Spin is now operating in 60 cities and at 25 universities. It seems experience has taught the startup how to move new vehicles into new markets. Eowyn Poon, Co-Founder and President of Spin, believes “that community integration is integral to our long-term success. That’s why we have local teams dedicated to listening to the people in the communities we operate, gathering feedback so that we can offer the best service possible.” This strategy is very deliberate. Anyone living in a city recently inhabited with shared kick-scooters will know that the micromobility vehicles have been met with very mixed responses.

Before Ford took it over in November of 2018, the Californian startup Spin launched in San Francisco in March of the same year, alongside competitor Bird. Several complaints about the sheer number of kick scooters coupled with a few accidents forced the city to shut down the sharing services over that summer. Despite such initial setbacks, Poon says “last year, we increased the number of US cities in which we operate by 600 per cent. We look forward to working collaboratively with cities and universities throughout Europe to bring the joyful, safe, and seamless Spin experience to the international community.”

Just a few days ago, Montreal decided to ban kickscooters after only 90 days of trialling the vehicles in the city. Critics say that the town provided too little infrastructure and too many restrictions to make a go of it. The city of Montreal complained that users didn’t park where they were supposed to, but failed to allocate sufficient parking places and adequate signage. In Paris, when kick-scooters were first introduced there, angered street users were throwing the scooters in the Seine, while one company made their business out of fishing them out using magnets. At last count, Paris Mayor Anne Hidalgo has decided that electric scooters that end up in the wrong places will be disposed of as rubbish, for this to work, the city has provided sufficient designated parking areas.

In Berlin, kick-scooter sharing startup Tier Mobility has turned the corner. It is now able to expand its offer to include electric moped scooters, having just bought up the vehicles form Coup (financed by Bosch), who could not make the business work for them. Tier Mobility is also set to expand, and like Spin, has its sights set on Paris, among other European cities.

Derrick Ko, one of Spin’s co-founders and current CEO explains Spin’s edge: “Being part of Ford helps us to offer long-term commitments to our partners as well as infrastructure investments such as Spin Hubs charging stations and multimodal lanes.” About addressing common concerns relating to shared electric kick-scooters, he indirectly acknowledges the experience that other companies have already made in Europe, “We are looking forward to expanding our services to Europe where cities are committed to making sustainable, safe, and people-centred transportation options work through regulatory frameworks and infrastructure investments.” It remains to be seen which infrastructure projects will be implemented for the beginning of Spin’s expansion in Europe in Cologne.