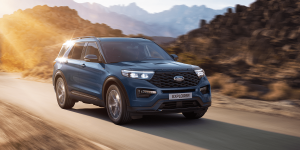 Ford has started deliveries of the Explorer plug-in hybrid SUV in Europe. The seven-seater went on sale last year but is only now arriving at dealerships with slight modifications Ford made to the drive.

The US carmaker now specifies a system output of 336 kW (457 hp) and an electric WLTP range of 42 kilometres (26 miles). For the drive, Ford combines a V6 petrol engine with an electric motor and a ten-speed automatic transmission. The maximum torque is 825 Newton metres, and Ford claims the top speed as 230 kph. The combined fuel consumption is to be 3.1 litres per 100 kilometres, according to WLTP. To achieve this value in real-life, however, the battery of the 5.05 metre long SUV must be recharged as often as possible.

Ford does not provide any information on its capacity in the communication; a brochure mentions 13.6 kWh – but not whether this is a gross or net value. The charging time is 5:50 hours at a 230-volt household socket and 4:20 hours at a corresponding wall box or public charging station.

Ford had announced the Explorer as a PHEV at the IAA 2019. The Explorer is one of a total of 18 models with an electrified drive that Ford plans to launch in Europe by the end of 2021. So far, we know of prices in Germany which Ford specifies as follows: In the sportier ST-Line, prices start at 76,000 euros, in the more luxurious “Platinum” version the Explorer PHEV costs 77,000 euros.