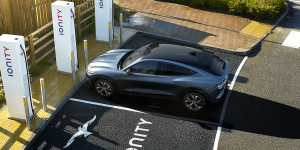 Following real-life testing, Ford is updating the fast-charging data for the Mustang Mach-E. In the ‘Extended Range’ variant with battery and rear-wheel drive, the SUV’s charging performance is around 30% higher than the values stated before, the car manufacturer reports.

The electric SUV with extended range battery and rear-wheel drive had an increased range of up to 26 kilometres during rapid charging at a real-life charging station compared to previous computer-simulated results. According to the company’s headquarters, an average of 119 km could thus be gained within ten minutes of charging.

The Mustang Mach-E with the same battery but AWD achieved an estimated WLTP range of 107 kilometres within ten minutes, with Ford’s latest measurements. The batteries of both versions (four-wheel and rear-wheel drive) could be charged from 10 to 80 per cent within 45 minutes.

In the case of the standard battery versions of the Mach-E, 91 kilometres (rear-wheel drive) and 85 kilometres (all-wheel drive) were recharged after ten minutes. According to Ford, the charging time from 10 to 80 per cent battery capacity is 38 minutes for these versions.

The maximum charging capacity of the Mustang Mach-E is always 150 kW (“extended range” battery) or 115 kW (standard battery). According to the WLTP, the power consumption varies between 18.1 and 16.5 kWh per 100 km. In relation to the extended range battery, this means a range of up to 600 kilometres, and up to 450 kilometres for the standard battery, Ford calculates.

Ford had already presented the 4.71 metres long, 1.88 metres wide and 1.60 metres high battery-electric vehicle in crossover style for the first time in November last year. The Mustang Mach-E is the first of a total of 18 electrified Ford models which the company wants to launch in Europe by the end of 2021.

In terms of price, the Mach-E will start at £40,270 in the UK. As of mid-March, the Americans have probably already received more than 40,000 advance orders. This would mean that the first year of production, for which the company plans to produce 50,000 units, would soon be sold out. New, in addition to the updated quick-loading data, is that Ford is planning to introduce over-the-air updates for the Mach-E. The car manufacturer has now confirmed this in a press release.

With regard to the availability of public charging stations for drivers of the Mach-E and, in the future, other electric models, Ford has set up its own charging service together with NewMotion called Ford Charging Solutions, including the FordPass app. Irrespective of this, the Group has also committed itself to install 1,000 charging stations at Ford locations in Europe over the next three years.