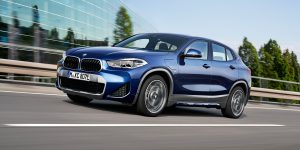 From July, BMW will also deliver the X2 compact SUV as a plug-in hybrid. The X2 xDrive25e will then cost at least 47,250 euros – and will also introduce some changes that will also be found in the combustion engine versions in the future.

The details of the X2 PHEV’s drive system were already previously released: BMW published some information on this in January, as well as announcing that the transaxle PHEV will also be used in the 2-series Active Tourer and Mini Countryman. The recap the most important data in brief: The 92 kW three-cylinder petrol engine drives the front wheels, the 70 kW electric motor drives the rear wheels. The vehicle’s electricity is stored in a 10.0 kWh battery (usable: 8.8 kW), the electric range is between 54 and 57 kilometres. According to BMW, these values have been measured according to WLTP, but have been recalculated to the old NEDC standard. Further details, such as the charging time, were already released in January.

With the PHEV offshoot, BMW is introducing a small facelift for all variants of the compact SUV – although the Munich-based carmaker prefers to refer to the X2 as SAC, i.e. a “Sports Activity Coupé”, in contrast to the X1. The front end has been redesigned, but compared to other BMW models, the basic shape with a relatively small radiator grille kidney has been retained. Overall, the new front end is intended to support “the sporty look”, but new standard LED headlights with integrated bad weather light are also intended to improve visibility. As a result, the previous round fog lights are no longer required.

In addition to the new front, all X2 versions can also be ordered in the new exterior colour “Phytonic blue metallic”, and BMW says that the range of optional extras for the BMW X2 is being expanded.

A new suspension tuning is only available for the PHEV model. Springs, dampers and the body structure have been “precisely tuned to the model-specific weight distribution” since the plug-in drive with high-voltage battery under the rear seat as well as having the electric motor in the rear all changes the car’s balance. The chassis has been lowered by ten millimetres, which according to BMW, was to improve the aerodynamic properties.

The standard equipment of the X2 xDrive25e includes 17-inch light-alloy rims, a 2-zone automatic climate control system and stationary air conditioning that can also be controlled remotely via app. The price of 47,250 euros applies to the “Advantage” equipment variant, the plug-in hybrid is also available as “Advantage Plus”, “M Sport” and “M Sport X” – although BMW has not yet disclosed the prices for these.