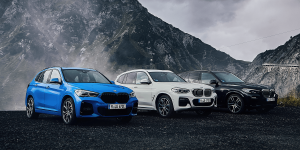 BMW is introducing the X1 as a plug-in hybrid. The X2 will also be equipped with PHEV drive later this year. BMW will be relying on the familiar powertrain from the 2-series Active Tourer and Mini Countryman.

BMW had already announced the drive variant for the recently relaunched X1 in September. The drive system will be taken from the 225xe, which itself received an update in August. Since then, new battery cells have been used in the compact van, increasing the gross capacity of the high-voltage storage unit from 7.7 to 10.0 kWh. According to BMW, the usable capacity is 8.8 kWh.

These batteries are now also installed in the X1 xDrive25e. With a combined power consumption of 13.8 to 14.3 kWh per 100 kilometres, the electric range should be between 54 and 57 kilometres – according to BMW, the values are measured according to the WLTP but have been recalculated to the old NEDC standard. The German manufacturer states combined consumption at 1.9 to 2.1 litres and CO2 emissions at 43 to 48 grams per kilometre. For the X2 xDrive25e, which has also been announced, the standard values are in each case slightly below those of the X1; in practice, they are likely to be virtually the same.

As with the other PHEV models, the two newcomers are equipped ex-works with a 2-zone automatic climate control system which can also be activated via an app as stationary climate control. Both also come with 17-inch alloy wheels as standard. According to BMW, there is still a choice of various equipment lines, and “almost all the options available for the conventionally powered versions of the BMW X1 and the BMW X2” can be selected – in the case of the X1, for example, a trailer hitch with a maximum towing capacity of 750 kilograms.

The base price for the X1 xDrive25e in Germany is 45,250 euros before subsidies. The German car and motorbike maker has not yet announced the prices for the X2 PHEV, nor the exact market launch of the model.