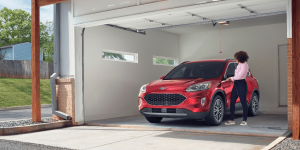 Ford introduced the new Escape plug-in hybrid SUV in the USA. The price for the Escape PHEV there starts below 35,000 dollars. The electric EPA range is 37 miles (60 km).

The new Escape, which is marketed as the Ford Kuga in Europe, is being positioned to compete with Toyota’s RAV4. It packs a bit more punch than the previous generation, as well as an improved 14.4 kWh battery pack. It can be recharged in 3.3 hours using Level 2 charging, combined with a 2.5 litre Atkinson cycle petrol engine.

To note is the different range between the two versions, as the European one only has a 31-mile range (according to WLTP). Additionally, Ford advertises a “class-leading” 100 MPGe (miles per gallon equivalent) for the US version. At the same time, the Kuga has to make do with an anticipated 1.2 litres per 100 km coupled with 29g/km CO2 emissions. The charging time is also slightly longer in Europe at 3.5 hours.

Hau Thai-Tang, Ford chief product development and purchasing officer, described the development as such: “The original Ford Escape was the world’s first hybrid SUV, and the all-new Ford Escape plug-in hybrid represents how far we’ve come in technology and efficiency. The all-new Escape plug-in has more power and more passenger space than the Fusion Energi plug-in, as well as four times the cargo volume behind its second-row seats. Escape also has an additional 11 miles of all-electric driving range before it uses a drop of gas.”

The plug-in hybrid Escape will available in all trims except the S and SE Sport.