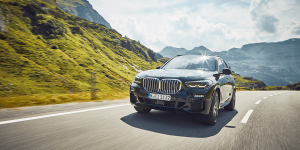 BMW announced the launch of the BMW X5 xDrive45e, the next-gen of the plug-in hybrid X5, which will go on sale in July 2020 in the USA. Compared to the European version, however, the available battery capacity in the North American version significantly differs.

BMW officially announced the market introduction of the BMW X5 xDrive45e for next month July 2020 with prices for the plug-in hybrid starting from $65,400 plus $995 Destination. After deducting the $7,500 federal tax credit, this will translate into an offer of $58,895.

As with the version already available in Europe, the X5 xDrive45e electric motor has an output of 83 kW and a six-cylinder engine 210 kW. According to BMW, the two drive units together generate a system output of 290 kW and a maximum system torque of 600 Nm. Since the electric motor is located between the combustion engine and the eight-speed automatic transmission, the X5 xDrive45e, unlike the BMW 225xe, is also an all-wheel-drive vehicle in electric mode. The maximum speed in purely electric driving mode increases from 120 to 135 kph, that’s 84 mph, compared to its predecessor. In hybrid mode, a maximum of 110 kph (68 mph) is possible with the electric machine.

The power comes from the aforementioned battery that holds 24 kWh in this latest version. In Europe, BMW enables 21.6 kWh usable capacity, translating to a WLTP range of 67-87 km (41 -54 miles) depending on the trim. If drivers want to achieve the latter value (at least theoretically), they have to pay close attention to the selected options when ordering. Wide tyres on large rims increase not only the weight but also the rolling resistance.

However, the tires are not the reason why the claimed available battery capacity is lower on the US version – 17.06 kWh or just 71% of the total. The reason for the 7 kWh buffer is not stated. It could be, however, that the standard (German) trim includes two-axle air suspension and electronically controlled dampers as well as some digital services specially designed for electric mobility. In any case, BMW reckons the EPA will estimate the X5 range at 30 miles (48 km) for the US version.

BMW produces the X5 xDrive45e locally at the Plant Spartanburg, South Carolina, the Group’s largest global production plant. In 2019, the high-voltage battery assembly area there doubled in size in preparation for the new X3 xDrive30e and X5 xDrive45e. 120 people currently work on the battery assembly line, according to BMW.