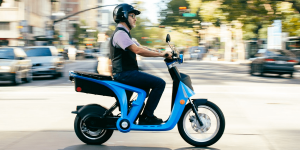 GenZe, the US subsidiary of the Indian car manufacturer Mahindra specialises on electric scooters and electric bicycles. GenZe is on the verge of collapse and Mahindra plans to dissolve the subsidiary within the next six months, reabsorbing the intellectual property rights for various other projects.

The announcement was made by the Indian conglomerate Mahindra & Mahindra during the presentation of the figures for the fourth quarter of the 2019/2020 financial year. Due to high quarterly losses, several unprofitable projects were put to the test. At GenZe the group management decided to discontinue the activities within half a year. GenZe (an abbreviation for Generation Zero Emissions), based in California, is a wholly-owned subsidiary of Mahindra. The electric two-wheelers were developed in Silicon Valley, the assembly is located in Detroit. According to Electrek, it is currently the only electric moped scooter manufacturer that produces in the USA.

GenZe currently offers two e-bike series and two e-scooter series. In the USA, many fleets of bike-sharing services rely on GenZe’s e-bikes, and according to a number of media outlets, the e-bikes were also designed for B2B business. In 2018 we reported that the on-demand mobility service Scoobi was introducing Pittsburgh’s first electric scooter fleet with 100 GenZe scooters.

One model series of e-scooters is also designed for fleets and delivery services, the other is aimed at private customers. Both the e-bikes and the e-scooters are modular so that customers can adapt the two-wheelers to their needs. However, the modularity also meant that the quantities of certain components remained low, making it difficult for GenZe to achieve economies of scale through volume.

According to Indian media outlets, GenZe vehicles were repeatedly tested in India but were never put on official sale by Mahindra. Mahindra has not yet commented on the future of the two US locations and their employees. However, the company’s know-how is to be used for the Mahindra Electric brand and other projects within the group.