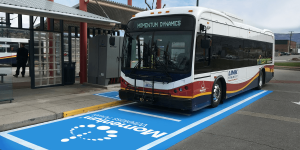 In the USA, Momentum Dynamics is supplying its 300-kilowatt wireless charging systems for ten new battery-electric buses BYD has delivered to Link Transit in Wenatchee, Washington.

The wireless charging systems will be installed to charge the ten BYD ten electric buses that were recently delivered to Link Transit in Wenatchee. The last two buses of the order arrived recently, joining the eight others that had arrived before the lockdown (we reported in our newsletter). The buses were the first to be completed by BYD after reopening its plant.

Link Transit started using the wireless charging systems in 2018 for the country’s first 200-kilowatt wireless charging system for a battery-electric transit bus. This inductive charging system has been operational on a BYD K9S bus since then. Momentum Dynamics’ systems have been in deployment for the last three years on the East Coast in Howard County, Maryland with Maryland’s Regional Transit Authority (RTA), along with systems installed in Chattanooga. Now the Momentum system is now being installed for operation across the US; in Martha’s Vineyard with Vineyard Transit Authority and for IndyGo’s system in Indianapolis.

Following this successful introduction, Momentum Dynamics Corporation and Link Transit extended their relationship with a new 5-year agreement in January 2020. Momentum’s system is made up of a module, or pads rated at 75 kW. By specifying multiple pads, vehicles can be rated up to 300-450 kW per bus. The same system can be used with passenger cars, taxis, buses and delivery vehicles.

Just a couple of months ago, Momentum Dynamics announced a cooperation with the North American vehicle manufacturer GreenPower Motor. They aim to integrate Momentum Dynamics’ inductive charging technology into GreenPower’s EV Star shuttle bus and to distribute it in the USA, Canada and Europe. Almost exactly a year ago, we reported that Finnish energy supplier Fortum and Momentum Dynamics set up a wireless fast-charging infrastructure for electric taxis in Oslo.