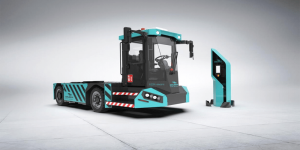 The model ATM Full Elec provides 24 hours of use per charge thanks to lithium-ion batteries on racks for powering the wheel motors. The vehicle has a towing capacity of 44 tonnes and a maximum speed of 25kph, according to press information. Enough to move trailers in large logistics centres around with zero-emissions.

Gaussin’s new order of 150 electric vehicles follows three others for the same model from Blyyd that amounted to 46 vehicles since 2017. The French company revealed that the COVID-19 crisis offered a boost to the business of retailers and e-commerce operators and said that ATM Full Elec trailer movers were widely used in their logistics sites throughout the lockdown.

The electric trailer movers currently in use are in operation in twenty logistics facilities in France. They serve high-level clients, among them Carrefour Supply Chain, Kuehne Nagel, Gerflor, Leroy Merlin, Cdiscount, Conforama, Auchan, But, Colissimo, Décathlon and Yves Rocher. Some these vehicles operate round the clock thanks to the integrated battery swap system that the French logistics vehicle provider says is easy to use.

“This new order confirms the success of the ATM FULL ELEC with major players in logistics and transport. Our duty is to support the energy transition of companies so that they are up to their historic task of developing environmentally responsible logistics. The ATM FULL ELEC, which is both efficient and clean, is part of that necessary movement and is testament to French know-how in the area”, says Damien Gambey, co-founder of Blyyd.

In May this year, Gaussin and Total announced they have developed what they say is the world’s first purely electric refuelling truck for aircraft. The prototype comprises two tank trailers, each with a capacity of 30 tons of fuel, and is expected to go into service at the end of this year.