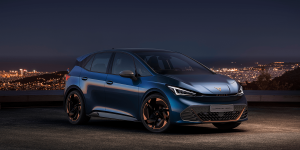 Seat announced that it will start production of purely electric vehicles at its main plant in Martorell, Spain, from 2025 onwards. The Spanish brand is allocating 5 billion euros to R&D projects for new facilities, equipment and models. The VW subsidiary also revealed new details about the el-Born.

Seat has decided that the el-Born, Seat’s first electric model based on the MEB Group platform, will be launched as a Cupra model in 2021. The Spanish VW subsidiary presented the el-Born at the Geneva Motor Show 2019 as a counterpart to the VW ID.3, although it was still a study at that time. Despite being renamed Cupra el-Born, the car is to be built by VW at the MEB plant in Zwickau – but not until 2021. According to the carmaker’s original plans, the Seat el-Born was to be launched this year.

Seat Sales Director Wayne Griffiths justified the change to the Cupra performance label by saying that the el-Born “displays all the genes of the CUPRA brand”. According to the Sales Director, Cupra is to be positioned as a brand between the volume and the traditional premium segment, thus opening up a new market. Seat, which with the increasingly high-quality Leon has certainly taken over many a Golf customer within the Group, is to concentrate above all on its role as a door-opener to young customer groups for the Group.


“Seat and Cupra are two sides of the same coin,” says Carsten Isensee, who succeeded Luca de Meo as head of the brand after de Meo moved to Renault. “Seat gives Cupra the volume basis for growth in terms of production, R&D and human resources, and Cupra allows Seat to move its centre of gravity towards more emotional cars with a higher positioning.”

Isensee plans to invest around five billion euros in various areas by 2025 – from the new production facilities in Martorell and Barcelona to research and development (including software) and electrification. The Martorell plant is to house both the company’s headquarters, the Technical Centre and the Design Centre under the Seat company structure. Seat’s software development centre is located nearby in Barcelona at CASA Seat and Seat:CODE. The Seat CEO underlined the goal to produce BEVs in Martorell from 2025, by which time “the electric vehicle market will have grown,” he explained. Until now, the company had only revealed that plug-in hybrids would be built in Martorell – such as the SUV Formentor, Cupra’s first own model. Seat has not yet specified exactly which electric models might be built in Spain.

Seat is also integrating its recently launched new urban mobility brand Seat Mó into its corporate structure. The micromobility brand will offer two the Seat Mó eScooter 125 and the Seat Mó eKickScooter 65, starting with the daily, weekly and monthly rental options for the eScooter 125 – including insurance, maintenance and charging costs and without a fixed contract term. Prices start from 149 euros per month. The eScooter 125 will also launch the sharing service in Barcelona in the coming weeks.

Audi brings PHEV version of the A7 to the USA