For the study entitled “How to drive winning battery-electric-vehicle design”, popular electric cars from Chinese production were analysed, both from established groups such as SAIC and the GM brand Buick, as well as from start-ups such as Nio or World Champions.

One of the results: In order to be able to bring the electric vehicles to market quickly, many manufacturers have taken a low-investment path – for example by converting existing internal combustion engine models. The proportion of local suppliers is correspondingly high. In addition, manufacturers use existing concepts and production technologies as well as commercially available components and a high degree of modularization for pre-assembly. “This approach creates a potentially profitable business case for at least some of the benchmarked BEV models,” the study says – as soon as companies are able to fully utilize their production volume and achieve corresponding economies of scale. 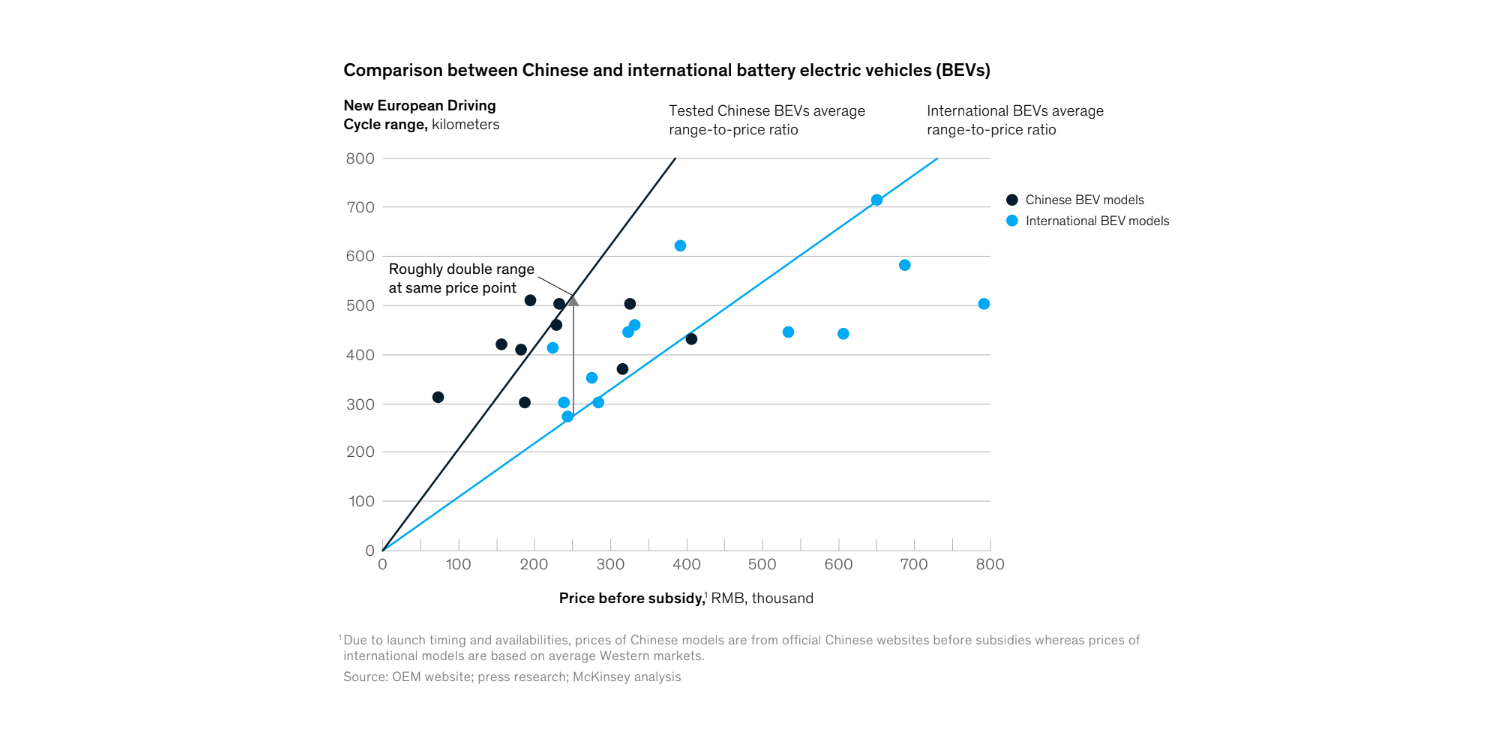 McKinsey sees established manufacturers as being much closer to the break-even point than start-ups – the big players already have production facilities that can be used more flexibly when using combustion platforms. In addition, size helps in development and purchasing. For the smaller ones, the focus is on structures and lower vehicle volumes. But: According to the consultants, seven of the ten vehicles analyzed could make it profitable if production is well utilized. Three models, however, have fixed costs that are too high to reach the break-even point – interestingly, one model each with very low, medium and one with very high fixed costs.

In the analysis, the experts also found that there is still no “silver bullet” in the design and procurement of electric drive components for Chinese BEVs, as is the case for European models. For two of the ten vehicles, all components were developed in-house, for three all drive components were purchased, and five chose a middle course of in-house development and outsourcing. There are also different approaches to battery designs, as well as to the networking and integration of the drive systems.


However, the picture is not yet uniform. For example, those who purchase many drive components (in the analysis, models 4, 8 and 10) deal with these components differently. McKinsey attests Model 8 a very high level of system integration, with virtually all components from the AC charger to the inverter, the motor and the battery cooling system being networked together. Model 4 has a low level of system integration, whereas in Model 10 the systems do not exchange data. Models 2 and 5, which both have components developed completely internally, do not have the thermal management of the motor and chargers connected to that of the battery, for example. Each manufacturer, therefore, has its own strategies for development, purchasing and system layout – which according to McKinsey offers room for optimization. 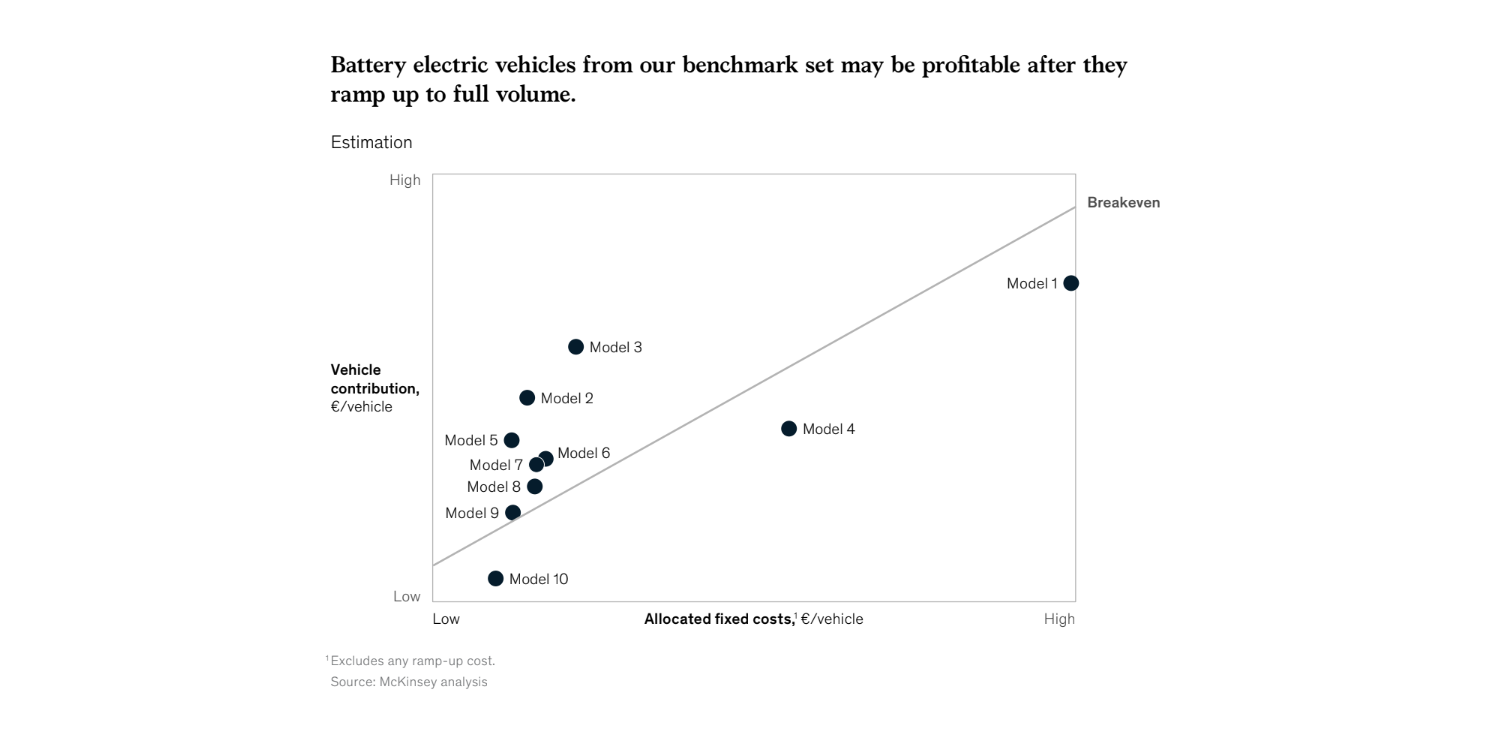 In the course of the study, McKinsey also conducted a survey of potential customers about the reasons for buying. The highest-rated point was the brand (reliable and credible) with 89 per cent approval, followed by performance with 87 per cent – in addition to quality and comfort level, criteria such as range and energy consumption were also considered. This is followed by low operating costs (86 per cent), connectivity (84 per cent) and only then security (80 per cent). Since all of the factors mentioned are very close to each other, it is clear that a manufacturer should not neglect any of these issues.

Just how important the combination of performance and operating costs is, for example, can be seen in another evaluation: Chinese electric cars generally offer a better ratio between the purchase price and range. While among the vehicles analyzed, the models manufactured in China offer an average NEDC range of over 500 kilometres at a price of around 250,000 yuan (approx. 31,500 euros), “international” BEVs do not even reach 300 kilometres of NEDC range. In absolute terms, some of the international BEVs offer higher ranges, but at a disproportionately higher price. Three of the China BEVs come over the mentioned 500 NEDC kilometres but cost only between 25,000 and 40,000 Euros.

In other words: Chinese electric cars now offer a lot for their money, and a strong supplier network makes this possible. So international manufacturers have to hurry to participate in market growth.

Incidentally, the consultants consider the slump in demand following the subsidy cuts in China to be only temporary: the e-models would become increasingly attractive for customers even without subsidies. In addition: “Regulations on ride-hailing and government fleets, as well as restrictions on traffic in city centres, will also keep up BEV demand.”