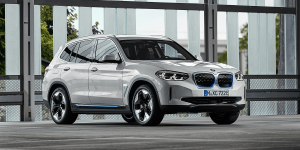 BMW has named the prices for the iX3, which is to be launched in China this year. When the electric SUV will later go on sale in Europe, BMW is calling for prices starting just under 70,000 euros.

Specifically, the Munich-based company states a base price of 68,040.34 euros including 16 per cent VAT and 69,800 euros including 19 per cent VAT in the announcement. The latter price is likely to be much more important, as the reduced VAT rate will only apply until the end of the year in Germany – so the effect of the lower price depends on when binding orders for the iX3 can be placed in each country. BMW has not yet made any statements on this in its announcement.

As is well known, the iX3 is built in Shenyang in China and exported from there. The electric SUV will be the first BMW model to feature the carmaker’s “fifth generation” of electric drives, i.e. it will have a newly developed drive train – electric motor, power electronics and transmission are combined in a central housing. The electric motor mounted in the rear generates 210 kW and offers the maximum torque of 400 Newton metres over a wide range. BMW specifies acceleration to 100 km/h in 6.8 seconds, the top speed is electronically limited to 180 km/h.

The battery with a gross energy content of 80 kWh (74 kWh net) should enable a range of up to 460 kilometres in the WLTP cycle; the standard consumption in Europe is between 18.5 and 19.5 kWh/100km. The obsolete NEDC is still used in the primary market China, where the iX3 achieves a range of up to 520 kilometers. BMW’s new procurement strategy for important battery materials is taking effect for the first time with the iX3: The Group buys raw materials such as lithium and cobalt directly from the mines and then makes the material available to cell manufacturers. Compared to the previous battery generation, the proportion of cobalt used in the production of the new high-voltage storage device has been reduced to around one third.

For the iX3, BMW has developed a function known as adaptive recuperation. This involves adapting the intensity of braking energy recuperation to the traffic situation determined by navigation data and the sensors of the driver assistance systems. For example, when approaching an intersection, a tempo-limited section of road or a vehicle in front, the recuperation is used to the greatest possible extent, while on the open road the sail function is activated as soon as the driver takes his foot off the accelerator pedal. The driver can also choose between three recuperation levels. If he sets the selector lever in the centre console from D to B, the maximum recuperation is active, which should make one-pedal driving possible.

The charging capacity of the battery is 150 kW, and BMW specifies a charging process from 0 to 80 per cent as 34 minutes. In this SoC range, the average charging power is thus 104 kW. In contrast to the i3, which was able to use its maximum charging power up to over 80 per cent SoC, BMW has to reduce the charging power of the iX3 beforehand – albeit at a significantly higher level. The Munich-based company speaks of a “unique combination of low power consumption and high charging power”, which should enable long-distance journeys at high average speeds. Other manufacturers offer a little more, but compared to the i3 or Mini Cooper SE (max. 50 kW), the progress is great. The AC charging power is 11 kW.

The load compartment volume of 510 to 1,560 litres is on a par with that of internal combustion engines. Except for the closed radiator grille and some BMW i-typical accents, the body largely corresponds to the familiar X3. This also means that BMW has made no changes to the charging connection. While Audi has installed one charging socket per side between the front wheel and the front door of the Q5-based e-tron quattro, BMW (like Mercedes for the EQC) has introduced the charging socket in the classic fuel filler neck on the passenger side. Depending on how the charging station is positioned, the iX3 may have to be parked backwards – which is sometimes a problem, especially at the sloping parking bays in front of some quick-charging points on the motorway.