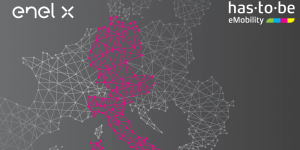 The Austrian company hopes the move will expand their reach to the southern regions of Europe, crossing the Brenner Frontier/ Alpine transit route in particular. Martin Klässner, CEO of has·to·be, emphasises that “unlimited mobility within Europe is an indispensable requirement”. He adds: “It is therefore essential for us to promote long-distance eMobility, on transit routes between Germany, Austria and Italy. The cooperation with Enel X underlines our vision of making eMobility accessible all over Europe.”

Enel X, a subsidiary of Italy’s formerly state-owned energy provider Enel, has a strong presence in the South of Europe. The company is working to install thousands of charging stations in Spain and Italy as well as Romania. The new agreement will give customers access to has·to·be’s roaming network, in turn, thus increasing their reach into the central and northern regions.

The cooperation with Hubject relies on an agreement with Enel X. The company had taken a strategic 12.5 per cent in the service provider last September. By joining the joint venture, Enel X extended the interoperability of its European network beyond the 8,000 public charging points than available to its customers.

Most recent roaming agreements with Allego, Bosch and Innogy this June saw the Enel X Juice network grow from 10,500 to over 30,000 public charging points. JuicePass users may also charge in countries such as Austria, Belgium, the Czech Republic, Denmark, Finland, France, Germany, Hungary and Ireland.

Also has-to-be recently concluded another roaming agreement, this time with EVBox, adding about 20,000 charge points to the network.

VW’s energy subsidiary Elli also acquired a stake in has·to·be a year ago. VW announced that the partnership would result in a simple, standardised and convenient charging system.