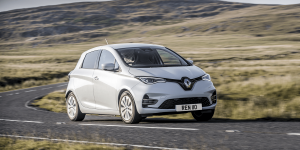 Renault has launched a Zoe van, a cargo version of its best-selling electric car. The exterior appears mostly unchanged, but inside there’s now a flat load space in the back. The EV will join the firm’s fleet of commercial electric vehicles later this year.

Not only the exterior remains unchanged. The Renault Zoe Van also builds on the same technology of the longstanding electric car, which received the third upgrade in late 2019. The electric van thus utilises the upgraded 52kWh battery pack with the range rated at 245 miles (WLTP) given a 50-per-cent payload and 75kg driver. Renault claims an identical range foe the Zoe passenger car.

The same goes for fast-charging with up to 50 kWh, which allows for 90 miles of range per 30 minutes of charging, says Renault. The CCS charge port is located behind the Renault logo, and the new plug is slightly larger than the previous one and consists of both a European standard socket and a two-pin connector for DC charging. A 22kW charger can recharge the battery in three hours.

So really it is just in the load bay the Renault Zoe van differs from the car. The French have removed the back seats, creating a cargo space rated at one cubic metre. The load bay is 1205mm long, and maximum load width is 1110mm. Renault evaluates the maximum payload at up to 387kg.

Prices with the plug-in van grant start at £19,380 (excl. VAT) and increase to £20,995, highlighting the business savings over the regular Zoe EV, which starts from £28,795 with VAT and before applying the electric vehicle grant.

Renault first announced the cargo variant of the Zoe in January 2019, however, with few details. Together with the Kangoo Z.E., Master Z.E. and a cargo version of the Twizy, the French will be offering a total of four all-electric delivery vehicles.